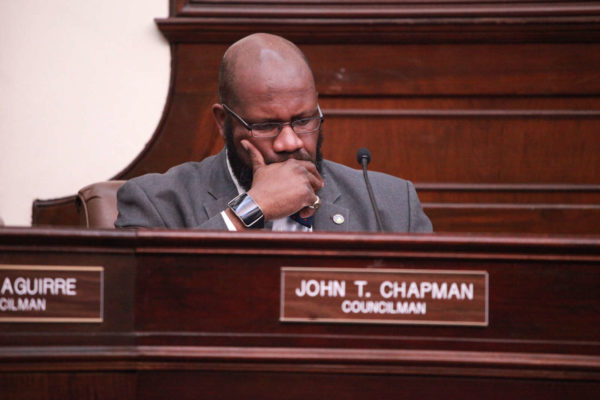 City Councilman John Taylor Chapman proposed that council approve a half cent more than the $1.15 rate proposed by City Manager Mark Jinks last month. That half cent equates to $2.1 million, which Chapman says is a cushion that will allow council to add budget items without making cuts.

“I think we need to go over and above the manager’s recommendation, even if it is half of a cent, to provide that conversation that if we feel strongly enough, if our residents feel strongly enough about a certain issue, a certain thing that needs to be funded and we’re not able to find the cuts… we have that availability,” Chapman said.

Chapman made a similar motion in last year’s budget process.

Jinks proposed raising the real estate tax rate by 2 cents, from the current $1.13 per $100, in order to pay for construction of two new elementary schools.

Mayor Justin Wilson said that the city philosophy has been to balance the operating budget with available revenue, and that any additional increases on the real estate tax rate are invested in infrastructure.

“I think that’s the philosophy the city manager took in proposing his budget, and we can certainly have a conversation during our process about where we end up, but that’s how I would look at this process,” Wilson said. “We’ll see where we all end up as we build consensus and try to get to the end of April.”

On Monday, council also conducted a budget public hearing and heard from a number of city employees concerned about compensation.

City Councilman Mo Seifeldein said that the city needs to be clearer regarding compensation issues with city employees.

“Our employees are telling us we’re not where we want to be comparatively,” Seifeldein said, and then addressed the city manager. “If council were to dedicate $2 million to employee compensation, do you have any idea how that would be distributed, given all of our employees feel like they’re getting underpaid, specifically the firefighters?”

Jinks responded, “I think I would like to consult with the HR director and my staff before coming back with how to allocate something.”

The full city press release on the approved tax rate cap is below the jump.

On March 10, the Alexandria City Council voted unanimously to consider a 2020 calendar year real estate tax rate of up to $1.155 per $100 of assessed value. The real estate tax rate City Council eventually adopts could be higher, lower, or the same as the current rate of $1.13, but cannot be higher than $1.155. No increase will be considered for the tax rates on personal property (vehicles) or business tangible property.

On February 18, City Manager Mark Jinks proposed a Fiscal Year (FY) 2021 Operating Budget that funds 100% of City government and Alexandria City Public Schools operating costs at the current tax rate of $1.13. The proposed budget also recommends a two-cent tax rate increase (for a total tax rate of $1.15) to be used solely for Schools and City capital needs, including the $248 million construction cost of new buildings for Douglas MacArthur Elementary School and the Minnie Howard Campus of T.C. Williams High School.

No decision has been made yet on what the adopted tax rates will be. City Council will adopt final rates in conjunction with the adoption of the FY 2021 budget on April 29. A public hearing on the ordinance establishing the real estate tax rate will be held on Saturday, April 18, at 9:30 a.m., in the City Hall Council Chamber (301 King St.).

For more information about the FY 2021 budget process, visit alexandriava.gov/Budget.

END_OF_DOCUMENT_TOKEN_TO_BE_REPLACED

More Stories
Ask McEnearney: What Suggestions Do You Have For Dog Owners When They Are Selling Their House?Police: Three Arrested for West End Carjacking, Armed Robbery