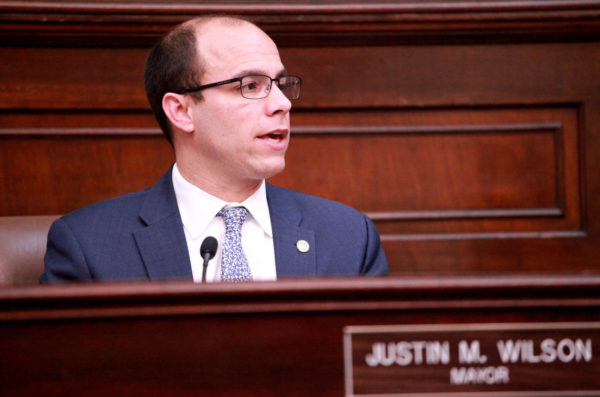 Alexandria declared a state of emergency on Saturday, and the City Council also approved measures to assist the community as it weathers the COVID-19 pandemic.

Mayor Justin Wilson said that the actions taken by City Council on Saturday are only the beginning.

“We are going to be speaking over the next couple days and weeks about other actions that we will be taking within city government, as well as in partnership with the state and federal government to support our residents, as well as to support our businesses during this incredibly difficult time, which unfortunately will likely become more difficult as we go,” Wilson said.

City Manager Mark Jinks said that the declaration is “usual and customary” in that it gives him additional powers, primarily to be able to direct resources within the city border for public purposes. Jinks also said that federal and state government will set up programs to reimburse local governments for their expenses during an emergency, and that such an emergency declaration can be the bar that is set for reimbursement.

“This is pretty standard practice in emergency management,” said Jinks, who also presented council with an updated succession list should he become infected by COVID-19. If Jinks is incapacitated during the emergency, then his responsibilities will fall to the three deputy city managers, followed by Director of Transportation & Environmental Services Yon Lambert and the Director of Recreation, Parks and Cultural Activities James Spengler.

‪The Council has unanimously approved ratification of a Local Emergency Declaration to support the City’s efforts to respond and address the COVID-19 outbreak. ‬

Northam announced on Saturday that a Virginia resident has died from COVID-19. There is currently one positive presumptive case in Alexandria, and 41 cases throughout Virginia.

Pam and I were deeply saddened to learn that a Virginian has died from #COVID19. The health of Virginians continues to…

Posted by Governor of Virginia on Saturday, March 14, 2020

Council approved the allocation of $100,000 in matching emergency funds to the ACT Now COVD-19 Response Fund with a goal of raising $200,000 so that nonprofits in the city can apply for and receive grants. The fund was established during the shutdown of the federal government in 2018, and more than $57,000 was distributed to eight organizations and more than 200 people were served, according to the city.

“At that time the need was not as great as we anticipate it’s going to be now, but we managed to help about eight organizations, 200 families that were impacted by the federal shutdown,” Deputy City Manager Debra Collins told Council.

Council also unanimously approved an allocation of $20,000 to ALIVE! to buy bulk food equivalent to 17,000 meals. ALIVE! is currently working with the city and buying food to support the city should deliveries need to be made to people under quarantine without food reserves at home.

Staff anticipate “that there will be an even greater financial need for resources,” noted a city report. “As time goes on, the hardships on individuals and families will intensify. Many already on the financial edge may be pushed into crisis. The demand for emergency health services, food, rent, utility, child care and mental health services is anticipated. This is when we will need our non-profit service providers the most.”

The full emergency declaration is below.

WHEREAS, the Director of Emergency Management of the City of Alexandria, Virginia finds that, due to the Coronavirus Disease 2019 (COVID-19). COVID-19 is a Communicable Disease of Public Health Threat for Virginia and is of sufficient severity and magnitude to warrant a coordinated response by City departments, agencies, and voluntary organization.

THEREFORE, IT IS HEREBY DECLARED, that a local emergency exists throughout the City of Alexandria; and

IT IS FURTHER DECLARED AND ORDERED, that during the existence of said emergency, the powers, functions and duties of the Director of Emergency Management shall be those prescribed by State law, as well as the Governor’s Executive Order of March 12, 2020, the President’s Declaration of National Emergency of March 13, 2020, and the ordinances, resolutions and operations plans of the City of Alexandria, and that any actions taken under this declaration shall be directed at the prevention or response for, damages, loss, hardship or suffering threatened by, or resulting from, the emergency.

The declaration is effective March 14, 2020, at 1700 hours and this declaration shall expire at June 10, 2020, unless extended or sooner terminated by the Director of Emergency Management in writing.