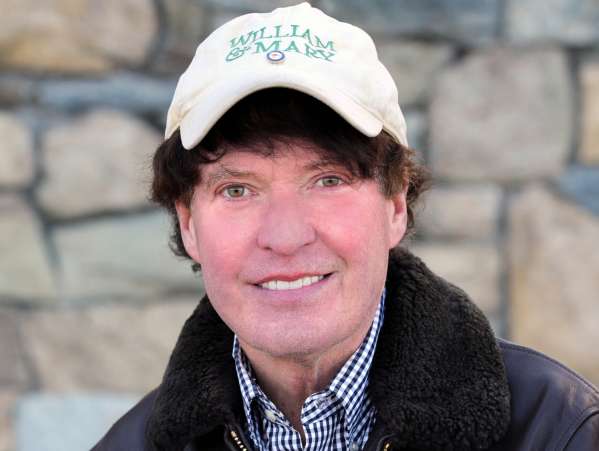 Don’t worry. Even though Hal Hardaway just closed on a house in Williamsburg, he’ll still be around half the time.

If you don’t know the 70-year-old Hardaway by sight, you might know his famous garage, or the emails the Old Town resident sends to more than 1,000 people on a daily basis railing about the Alexandria waterfront or videos he shares of electric scooter violators.

“I see four-year-old kids on scooters,” Hardaway told ALXnow. “Multiple kids on scooters, fathers with their little toddlers, you know, hanging on, going full speed down the street without helmets. I mean, that is just wrong. And then you get to the point, and we could talk about this for three hours, of how are we going to enforce the law?”

When not fixing up classic sports cars (he has five), Hardaway, a retired U.S. Navy captain, can routinely be spotted walking around lower King Street in his baseball cap, jeans and Navy jacket. He’s a historian at heart and wants to keep the city’s historic appearance in tact, and jokingly refers to last year’s Mirror-Mirror art display on the waterfront as “Technicolor Stonehenge.”

He also once unsuccessfully sued the city for what he viewed as height violations in the Robinson Terminal South development. Recently, he made a Freedom of Information Act request for information related to scooter companies operating in Alexandria. He found that there have been no fines levied against the companies since their introduction in Alexandria last year.

Lately, Hardaway’s been impressed with the Alexandrians Against The Seminary Road Diet Facebook group, and has commented on a few posts.

“This Seminary Road page is the most organized group I’ve seen on going after the city on these kinds of issues, and a kind of fun thing,” Hardaway said. “It’s really interesting, because people have got their their broad swords out now about City Hall… I wish I could have done something like this, and so I’ve made a couple comments this morning. I hope it expands into something greater, something beyond just Seminary Road.”

An only child, Hardaway grew up with an affinity for fixing things in his father’s machine and welding shop in the small town of Crewe, which is about 45 miles southwest of Richmond. After graduating with a physics degree from The College of William & Mary, he spent 30 years in the Navy and lived all over the world as a cryptologist (code breaking), even working a three-year stint as inspector general of the Naval Security Group Command under the Chief of Naval Operations.

Hardaway moved to the area in the late 1990s for his final naval tour at the Pentagon, and never left. He retired from the Navy in 2002 and then worked for eight years in the private sector before officially retiring in 2010. That was around the time that he got interested in local politics.

“I started attending waterfront meetings,” Hardaway said. “The entire reason the city is here is because of the waterfront, and there isn’t any signage or historical markers telling tourists why it’s so important.”

Hardaway is a member of the Environmental Council of Alexandria and sits on the organizing committee for the Old Town Festival of Speed and Style classic car show, the latter of which he co-founded. He recently bought a house in Williamsburg that will be able to accommodate four of his cars, and will soon be spending about half of his time there.

Like classic cars in need of repairs, he looks at Alexandria as a beautiful but broken machine, and he wants to help fix it.

“I’m not going anywhere. I’m going to be here for years,” he said. “I think some progress is being made mainly because lots more people are engaged. Look at the development of the wetlands at Potomac Yard. That’s another one. The city is driven by money, and I like it here, but it’s hurt the quality of life, which is going downhill.”