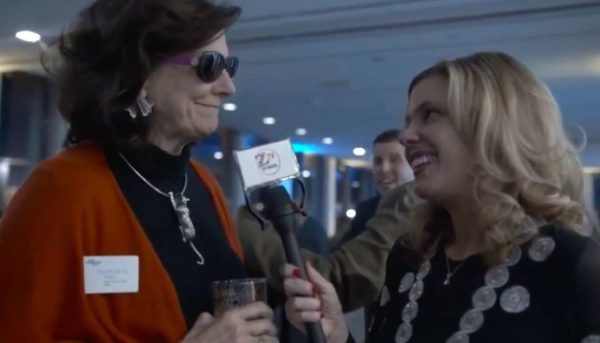 Some of Alexandria’s print news outlets are getting the word out in new and creative ways.

The Port City is home to a number of outlets that have been tied down to the printed word for years. But since the beginning of the year two of them, the Alexandria Times and The Zebra Press, have expanded coverage by launching new online features.

The Zebra, a 10-year-old outlet that puts out an 80-page-plus “good news” paper every month, has made an even bigger push online. The Zebra recently announced that former Alexandria Mayor Allison Silberberg will host a show on its new Z-TV channel on YouTube. The show, “Conversations With Allison,” will premiere with Silberberg’s interview with Alexandria Living Legend Lillian Stanton Patterson.

Zebra brought on Allison Priebe of Queen Bee Designs (825 S. Washington Street) as its creative director last November. Priebe hosts Z-TV’s “Buzzworthy” segment, which premiered on Youtube on Feb. 1 with the coverage of an Alexandria Chamber of Commerce event.

Zebra is also in production for its new video podcast, The Proxomity Effect, hosted by Paul Friedman and recorded at Raw Coffee Audio in Del Ray. And the paper announced last week that it would expand its coverage area to the “Alexandria section of Fairfax County,” including “Belle View, Fort Hunt, Mount Vernon/Lee, and all points in between.”

Last month, the Times — a weekly newspaper that started in 2005 — launched its first “Speak Easy” podcast. The monthly show is hosted by Times reporter Cody Mello-Klein, who will be joined by editor Missy Schrott in talking about local issues and interviewing interesting Alexandrians.

“This is our first foray into podcasting, at least for the Times,” Mello-Klein said in an introductory episode.

Schrott added, “You’re going to have to bear with us as we kind of get into this new platform of media, but we’re excited to share this with you and kind of explore the news on a new level.”