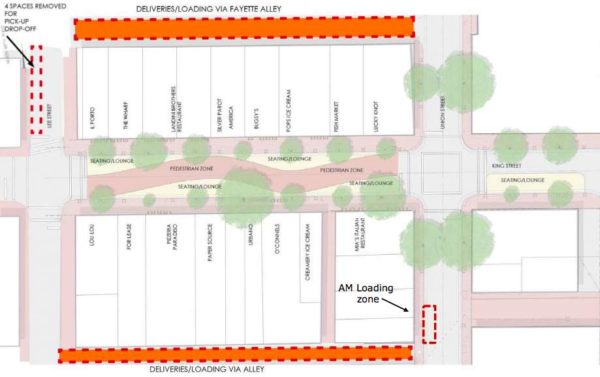 Alexandria officials are still working through the details, but there’s an unmistakable air of excitement from city staff and leadership when it comes to turning part of King Street into a pedestrian-only zone.

The proposal would close one block of King Street — between Lee Street and Union Street — to car traffic on weekends and turn it into a pedestrian-only zone.

Staff presented the latest on the plan to the Transportation Commission on Wednesday, Jan. 15, after which the Commission unanimously approved the plan and speculated that the closures could become permanent if all goes well.

Outreach for the project is planned to continue over the next month, with meetings scheduled with the Small Business Development Association, Visit Alexandria, and Old Town businesses next week. 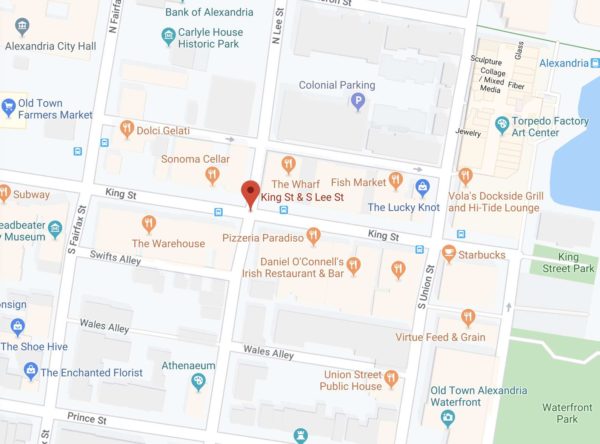 Deputy Director for Transportation Hillary Orr told the Transportation Commission the main concerns they’ve heard voiced are about the safety of the project. Police have suggested the use of solid barriers that have to be screwed in (and unscrewed for removal), a proposal also endorsed by the Fire Department due to concerns about vehicles entering the pedestrian zone — inadvertently or otherwise.

City staff said they are also looking into types of plants and stones that could provide additional barriers.

Orr noted that the intersection of King Street and Union Street has been a transportation challenge for city staff for years, particularly with vehicles turning onto one of the most pedestrian-heavy sections of Old Town.

Orr described the project’s components as “pilots within a pilot,” saying that pieces of the project like changes to loading zones, parking, and vehicular traffic patterns could impact city policy beyond just this closure.

The owner of a few nearby properties raised some concerns at the meeting, noting that the alleyway to the south being proposed for deliveries and loading is very narrow and could pose a safety risk with cars increasingly using it to get around the closed King Street.

In addition to car access, the plan will remove parking spaces not just on that block, but on Lee Street and a block east on King Street.

If approved, the closures would last from April to October, but the Transportation Commission members already expressed enthusiasm for seeing the project extended or made permanent if the closure this summer goes well.

Image (top) via City of Alexandria (middle) via Google Maps