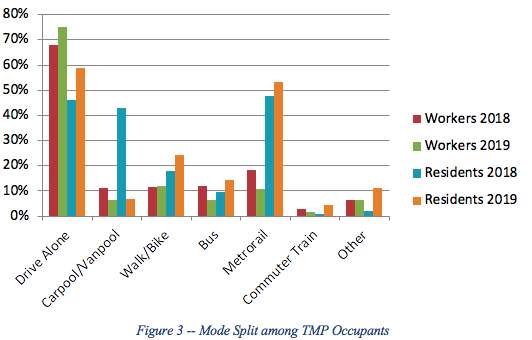 While more property owners have signed on to plans to shift Alexandria’s workforce to car-free, a report on those plans showed an increasing percentage of workers and residents in new developments driving alone compared to last year.

Some commercials and residential developments are required to have plans to get employees or residents to use non-car transportation to commute. These plans are called Transportation Management Plans (TMPs) and there are currently 75 developments in Alexandria with TMPs.

The report does state that these results could be inflated because the program is heavily weighted towards ten large office developments with TMPs, outweighing others, but the results still show riding alone dwarfing all other forms of transportation.

Among residents, driving alone and taking Metro increased over the last year, despite the Metro shutdown over the summer. The percentage of residents saying they carpool fell dramatically though, from over 40% to under 10%.

Staff acknowledged that there are several issues with the current TMP system, “including low compliance, a penalty structure that is less expensive than compliance, and poor incentives to comply.”

According to the report, staff is planning to make recommendations regarding the program next year to push larger, new developments to get employees and residents out of cars and into mass transit.

There are currently 522 employers with TDMs, according to an update delivered to the Transportation Commission, up from 313 last year. These range from the indoor playground Scramble to federal agencies like the Department of Defense, National Science Foundation and Patent and Trademark Office.