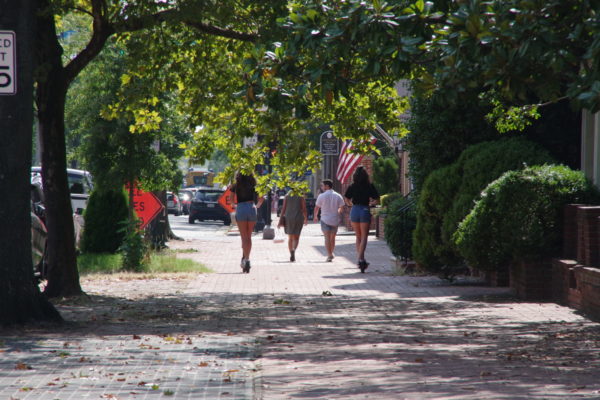 As Alexandria readies updates for its city-wide transportation plan, the city opened up the floor to other local government experts for lessons learned.

During a community forum last night (Monday) about Alexandria’s new transportation plan, city staffers hosted transit leaders from D.C. to Columbus, Ohio for a discussion on what Alexandria should focus on.

“This is a really exciting time to be in transportation,” said Director of Transportation and Environmental Services (TES) head Yon Lambert, who referenced the projects to build a new Metro station entrance at Potomac Yard, as well as Amazon’s headquarters and the new Virginia Tech campus.

Scooters Are Here to Stay

One new feature of the upcoming master transit plan, renamed “Mobility Plan,” will be the e-scooter program City Council members are considering expanding.

“When they first started they were like big toys,” said Jordan Davis, who heads the Smart Columbus smart city program in Columbus, Ohio and who noted that nowadays many people are using scooters for practical, routine trips. “So I think they’re here to stay.”

When asked by the moderator, about half the 80-member audience indicated they had used e-scooters and e-bikes.

TES Principal Planner Jennifer Slesinger said one part of the new master plan will focus on smart mobility. Panelists encouraged planners to make real-time data a part of that.

Hillary Orr, Alexandria’s Deputy Director of Transportation, previously told WTOP that the city plans to redirect cars out of neighborhoods and back to “arterial” roadways, and use sensor technology to allow buses longer green light time to prioritize transit riders.

“I have seen a parking garage that is never full just around the corner here,” she said of the Carlyle Place parking garage, adding that “information gaps” are one of the things technology addresses well.

You Can’t “Build” Away Congestion, But You Can Build Safety

Several panelists echoed the famous phrase that planners can’t “build” their way out of congestion problems.

“The only way out of our congestion is to get out of our single-occupancy vehicles,” said Atherton.

The D.C. officials said everyone needs to “remember physics.”

“We need to look at force and mass in order to avoid and mitigate crashes to keep people safe,” she said.

Alexandria released a public survey this summer to guide the plans, which will last another decade, as Alexandria Living reported. Posters shared during Monday night’s meeting indicate that the new plan is being designed around the survey responses, in which residents asked for “safety, accessibility, and ease” in their transit modes.

But don’t hold your breath to see the new document: planning discussions are expected to continue into Spring 2020.