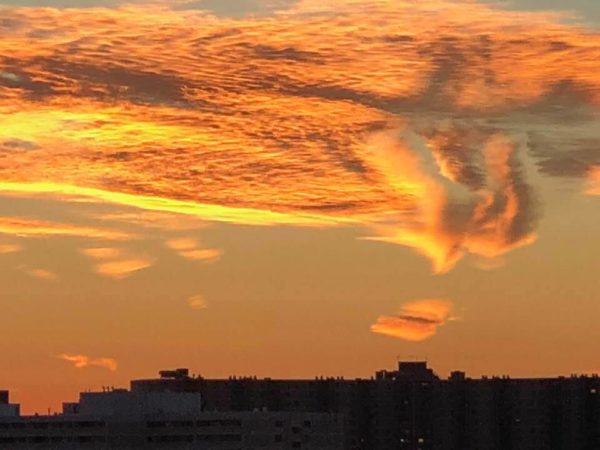 For the last two years, the photographer has kept an eye out for beautiful sunsets from his 42-foot-long balcony, on the 11th floor of his condominium on South Reynolds Street in the West End.

“The first thing I do after I come back home from an event or shopping, or something, is look out the window. If see a sunset that’s visible, I make preparations,” Powers told ALXnow. “It soothes me, relaxes me. I feel like things can be good, or that I can experience hope in the midst of chaos. On a good day it tops it off, on a bad day it helps reverse my emotions and improve the comfort level of some mess that I just got out of. Most of the chaos, of course, is happening in Washington, D.C.” 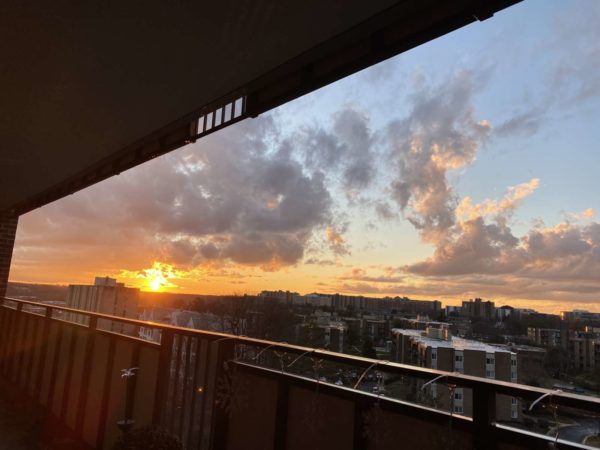 Powers has since taken hundreds of photos of sunsets — all of them with his iPhone and not his professional Nikon equipment. He then uploads the photos to Facebook. 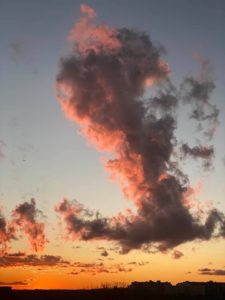 “Virtually everyone I meet on Facebook tells me how much they love my sunset photos,” Powers said. “People like it and I like doing it, and throughout the course of the year I will take several outstanding photographs.”

Powers, who retired in 2007 after 30 years as an administrator with the City of Alexandria’s Department of Human Services, has been taking photos since he was eight years old. He and his wife, Janet, lived in a single family home in the city for 34 years, and the sunsets were always obscured by trees. That was until he moved into Templeton Condominiums on South Reynolds Street.

“The photos help lift my spirits,” he said. “You’ll see variations of orange, bright orange, muted orange — all kinds of orange pictures that give me a view that most people in Alexandria have never seen. People will tell me all the time, ‘I was out all day and I never saw that.’ What they saw was a sunset in a distance blocked by trees, and it’s nice but its not the same.”

Powers said that the first batch of photos he took included his balcony, but that he later zoomed in for subsequent shots.

“As I developed doing this over time, I started focusing in within the sunset,” he said. “Our balcony faces west over Fairfax County and beyond, and I always try to get a building in Alexandria in the forefront to give it perspective. It’s just a different view of a sunset that most people have never seen here.”