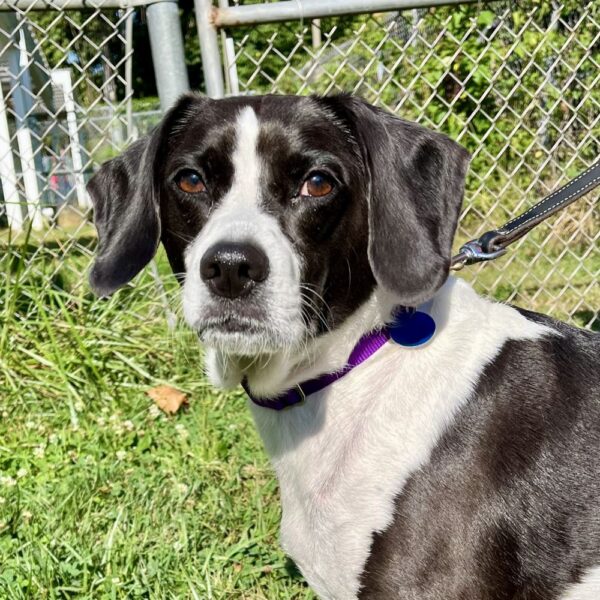 Thoughts of a new home are music to Banjo’s ears.

The six-year-old male black-and-white beagle mix learns the most about the world with his nose to the ground, so don’t be surprised if he greets you starting with your shoes – and works his way up, says Animal Welfare League of Alexandria spokesperson Gina Hardter.

“Banjo is a mature gentleman who is well past his puppy stage and now focuses more on the finer things in life: leisurely walks, yummy food and the love of a good human best friend (or two or three),” Hardter said. 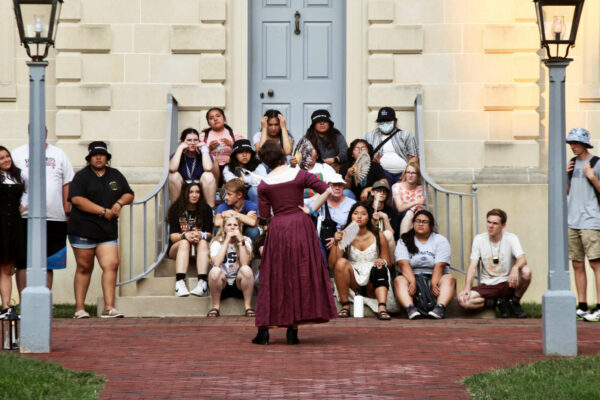 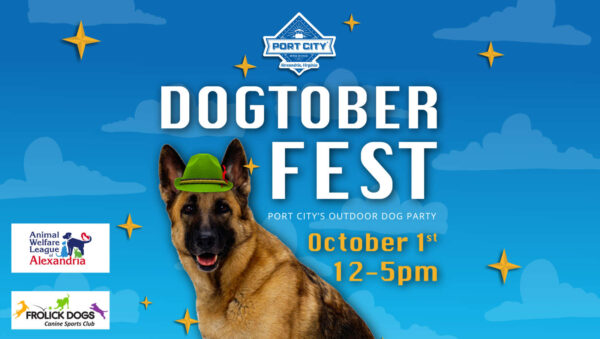 Port City Brewing Company (3950 Wheeler Avenue) is going to the dogs on Saturday, October 1, with their annual Dogtoberfest celebration.

The free outdoor festival goes from 12 to 5 p.m., and will feature dog-friendly activities, including pet portraits, a bulldog kissing booth and an agility course.

Food and drinks will be provided by Haute Dogs & Fries, Pho Wheels and Daddy G’s Chips and Salsa, and Scuttlebutt Bakeshop.

The event is hosted in partnership with Frolick Dogs and the Animal Welfare League of Alexandria. 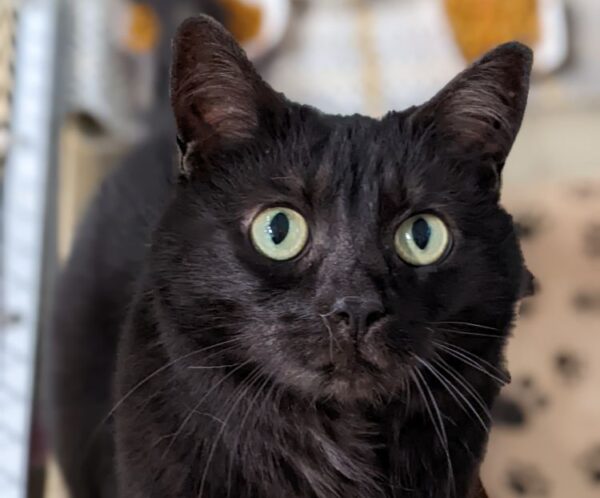 The nine-year-old female black medium-haired cat is up for adoption with the Animal Welfare League of Alexandria.

“Betty is definitely channeling her zen vibe,” said AWLA spokesperson Gina Hardter. ” She’s not the kind of cat you’ll find climbing the curtains; her preferred perch is on the couch, by your side, maybe taking in a Netflix binge of Midsomer Murders.” 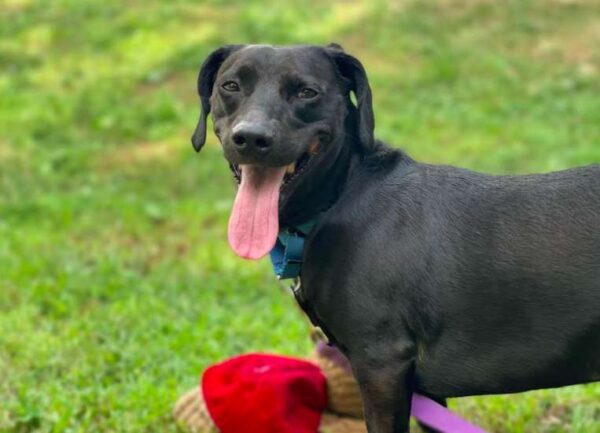 They don’t get much sweeter than Toblerone.

The three-year-old mix has the long body and short legs of a dachshund and the adorable face and ears of a Labrador retriever.

“He’s the type of dog that everyone you meet will ask about,” said Animal Welfare League of Alexandria spokesperson Gina Hardter. “Besides his intriguing looks, Toblerone also has a sparkling personality, wagging his tail joyously at everyone he meets, then crawling into their laps for snuggles.”

Learn more about Toblerone and schedule time to meet him at AlexandriaAnimals.org/Adopt-By-Appointment. 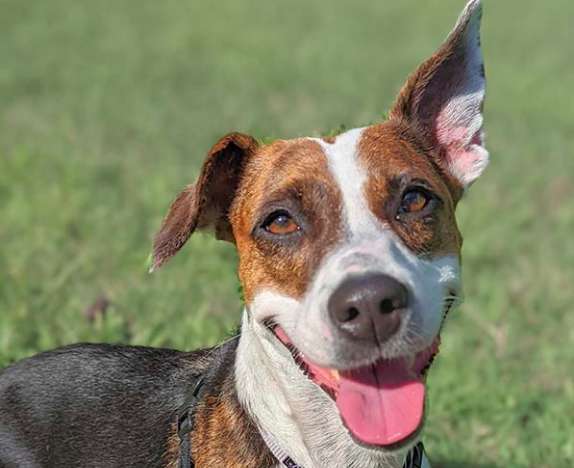 Able might look big in her picture, but she’s a petite princess, says the Animal Welfare League of Alexandria.

The four-year-old tricolor hound mix weighs in at just over 25 pounds, and her favorite games are “Fetch” and “Tug.”

“She has a cute little hound head and body, but the legs of a much shorter pup,” AWLA spokesperson Gina Hardter told ALXnow. “She loves a good treat and could be motivated to learn a lot more games — for the right reward.” 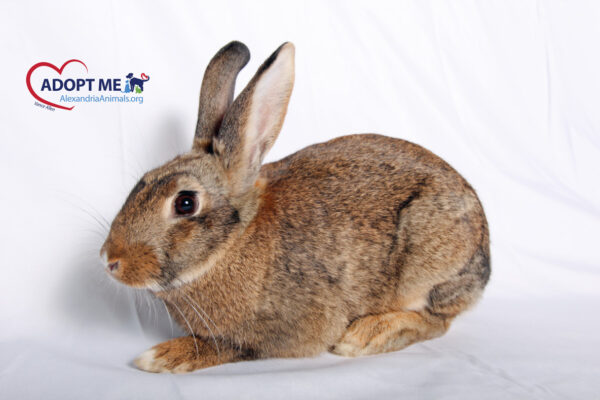 Buntilda the rabbit is up for adoption with the Animal Welfare League of Alexandria.

The 15-month-old female agouti-colored rabbit is shy at first, but AWLA staff and volunteers have been working with her on socialization via target training, and she is so much more comfortable meeting and approaching new people, according to AWLA spokesperson Gina Hardter.

“Buntilda is a champion chewer, but only when it’s appropriate,” Hardter said. “Whether it’s hay, veggies or a fun wooden toy, Buntilda loves to keep her gnashers in shape with some rabbit-appropriate munching.”

Gelato is a playful puppy who enjoys hanging out with other dogs, but the puppy also faces an incurable medical condition that means he likely only has months to live.

It’s a tall ask for any family to adopt a pet knowing that their time with the dog will be brief, but Gina Hardter, director of marketing and communications at the Animal Welfare League of Alexandria (AWLA), said the shelter was flooded with calls from locals offering to give Gelato the home he deserves — however briefly. Now Gelato has found his new family.

Hardter said 12 families reached out to inquire about Gelato after the AWLA posted about the dog on social media, but the first one to contact the shelter wound up being a good fit. Now, Hardter said he’s in a home with other dogs.

Gelato is a rare circumstance for the shelter. While cases do come in with incurable medical conditions like Gelato’s, they tend to be older. Gelato is only around three or four months old.

“That’s very rare,” Hardter said. “A lot of people said they’ve never seen that in all their years of animal welfare.”

Hardter said when the team at AWLA first found out about Gelato’s condition, they believed he would only survive for days.

AWLA doesn’t euthanize animals for remaining in the shelter for any length of time, but Hardter said sometimes it can be necessary if the animal has a health condition that is negatively impacting their lives to the degree where it’s uncomfortable for them to live or if the animal is a danger to the community.

When that prognosis said the puppy likely had a few more months, Hardter said they got to work finding him a home to spend those months.

“We wanted to make sure we were doing the right thing,” Hardter said. “When we found out from the vet oncologist it was incurable cancer, we learned Gelato could have several good months [and he’s] not going to know he has a tumor or has cancer. He’s going to be a happy puppy up until his last days. We wanted him to have that time and in a home environment like any other puppy. That’s a big ask, a big imposition, but we know he deserves it and we have a caring, compassionate community.” 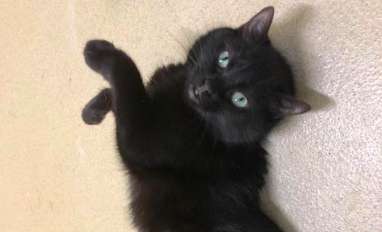 The two-year-old female black domestic short-haired cat is up for adoption with the Animal Welfare League of Alexandria.

“She’s always ready with a gentle head butt to let you know when you are scratching her chin just right,” Hardter said. “When Coal determines she’s the house panther for you, consider yourself lucky, because you have made a friend for life.”

Coal is currently staying with an AWLA foster caregiver, so to learn more about her and schedule time to meet her from her foster home, email [email protected] or call 703-746-4774 (opt. 2). 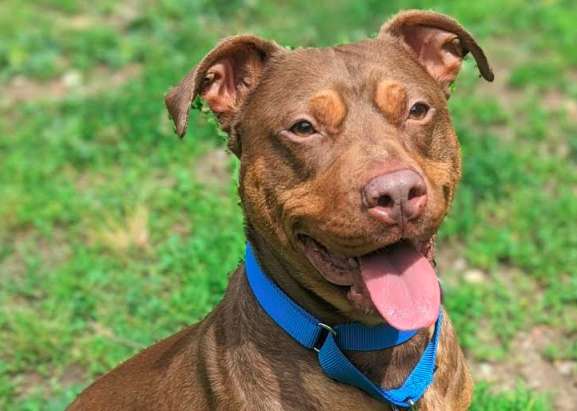 Chance is full of cheerful energy.

The four-year-old terrier mix is up for adoption with the Animal Welfare League of Alexandria, and is up for all forms of exercise.

“Chance’s unique red and fawn coloring and his trademark grin make him one of the AWLA’s most distinctive-looking pups,” said AWLA spokesperson Gina Hardter. “But his people-friendly personality is what makes him so wonderful.  Whenever you say his name, his tail starts wagging.”