Over 13 years since it was originally proposed, a plan to turn the quiet southeastern corner of the Eisenhower corridor into a pair of mixed-use towers is coming back with some new proposed uses.

A project called 765 John Carlyle proposes turning the empty grass lot near what is still Eisenhower Circle — for now — into “two mixed-use towers conjoined by the common podium” according to an application by Carlyle Plaza, LLC.

“The project will also include ground-floor retail to activate the adjacent streets,” the developer said. “The towers are conjoined at the base by an above-grade parking structure that ascends approximately four stories above the ground floor retail and lobby space.”

The new building is part of a broader plan to turn Eisenhower Avenue into a hub of commercial and residential activity, with a particular focus on the eastern end of that corridor to take full advantage of the nearby Patent and Trademark Office and relatively new National Science Foundation building.

The project is scheduled for review at the Carlyle/Eisenhower East Design Review Board on Monday, June 22.

Nobody on the City Council seemed particularly happy about transportation changes planned for Eisenhower Avenue, but at this point too much money has been invested to turn back, city staff argued.

The plan, which has been in the works since 2003, involves turning the traffic circle at the east end of Eisenhower Avenue into a T-intersection, adding turn lanes to the intersection with Mill Road, and widening Mill Road.

The plan had been funded through state and federal funding, but higher-than-expected construction bids left the project over budget and in need of $2 million from the City of Alexandria. The Council voted to approve the funding, though with some reluctance and pushback from some local residents in the public comment.

Rebecca Tiffany, a resident of one of the nearby buildings, said her children frequently cross the five lanes of Mill Road and she can watch the traffic from her window.

“The traffic circle is basically never congested,” said Tiffany. “There are no issues with the traffic circle. There’s a plan to turn it into a T-intersection, and I firmly believe that’s a solution in search of a problem.”

Tiffany said many in her community enjoy the circle, with its central grassy area and statue of Dwight D. Eisenhower, for whom the circle is named.

Each of the public speakers noted that they were unconvinced adding more turn lanes would fix the traffic backup on Mill Road, given that most of the backup is caused by cars trying to get to Maryland on I-495.

“I personally think we have the worst traffic in Alexandria, and we don’t complain about it as much as others because it’s a different kind of community than communities with lots of time on their hands,” Tiffany said. “Everyone works a lot, but you actually see the full backup. One or two cars can come through the intersection at any time.”

Daniel Beason, Vice President of the Eisenhower Partnership but was speaking as a resident of the street, said he was concerned the only thing that would change with adding more lanes is it would signal to navigation apps like Google and Waze that they can direct more cars on that route.

Beason also lamented that plans to add rapid bus service to Eisenhower Avenue were scaled back as part of the compromise to restore routes set for cuts.

Even some on the dais explored the idea of voting no on the funding but were told in no uncertain terms by City Manager Mark Jinks and Yon Lambert, director of Transportation and Environmental Services, that this would be a bad idea.

“The city has already expended state and federal funds to acquire right of way,” said Lambert. “The city gone through construction bidding process, we received four bids. Where we are right now, the council has three options: cancel the project, reduce the project scope, or provide additional money to close the funding gap. Staff strongly recommends alternative three because that is the only option that is viable. If canceled, the city will have to repay VDOT $3.6 million for the acquisition of right of way and for design costs.”

“To underscore: we’re asking for $2 million to build the project and would have to come back and ask you how to fund $4 million not to do the project,” Jinks added.

Lambert also pushed back against the characterization of the T-intersection as worse than the existing traffic circle. The T-intersection would allow better use of open space than a green area inaccessible at the center of a roundabout, Lambert argued.

The T-intersection would also support the increased levels of development planned for the east end of Eisenhower. Councilman John Chapman said the value of changing the street design hinges on those properties actually being developed.

“With what we’re looking to do at east Eisenhower with [underdeveloped] lots there, judging by how many units coming to that area, a T-intersection will probably work a lot better than an overflowing circle,” Chapman said. “My concern is… we haven’t seen some of those proposed developments come in. Some of the things we’ve reviewed haven’t fleshed out. So I’ve started to disagree that we need to actually move on this.”

“We need to figure out if some of these developments are going to develop,” he added, otherwise “”we’ve done a project that wasn’t totally necessary and that’s a big concern.”

Mayor Justin Wilson reiterated at the meeting that he wasn’t enthralled with the project, and said as much on the ALXnow Facebook page in response to a reader’s comment.

“I don’t love this project and I was not a fan when we originally approved it back seven years ago,” Wilson said. “I did push most recently to see if there were other options given where we are. Unfortunately, there are not great options.”

At the City Council meeting, Wilson said the situation raised questions about how the city keeps up with its larger capital projects. Despite their misgivings, the council voted unanimously to approve the funding request. 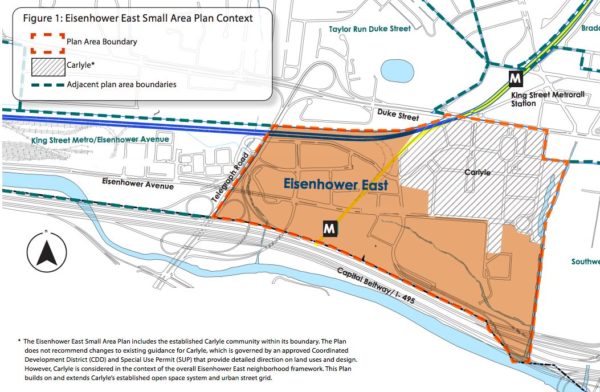 The Alexandria Planning Commission is scheduled to consider a plan update to increase the number of affordable housing units in Eisenhower East.

Under the proposal, 10% of additional residential rental development will be devoted to affordable rental units. At full buildout, the plan anticipates up to 400-450 affordable units in Eisenhower East, versus the 66 affordable housing units that currently exist in the area.

“The plan supports the city’s Housing for All policy and objective to develop or preserve 2,000 affordable housing units through 2025, as well as the Metropolitan Washington Council of Governments regional housing initiative to increase the production of affordable housing over the next decade in response to significant forecast shortages,” notes a staff report.

The Planning Commission meeting was set to take place tonight, but that may be delayed due to weather. It is not clear when the City Council will vote on the final plan update.