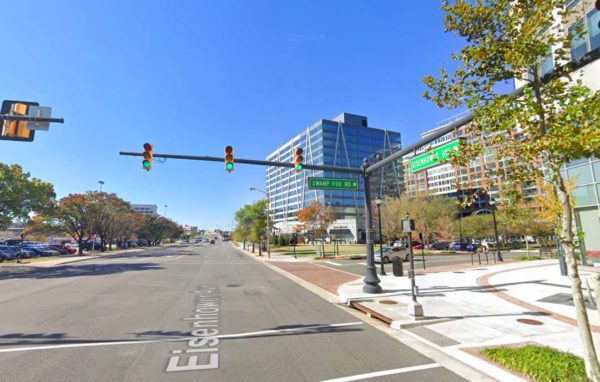 Though barely more than five minutes on a in a nearly six hour meeting, on Saturday the City Council finally did away with one of Alexandria’s more bizarre street names.

Toward the end of the meeting, the City Council voted unanimously to replace Swamp Fox Road with Hoffman Street, celebrating local developer Hubert Hoffman Jr., founder of the The Hoffman Company that developed much of the nearby area and for whom much of Eisenhower East is named.

The question of whether Swamp Fox Road was named for Revolutionary War guerrilla and slave owner Francis Marion attracted some discussion during the renaming process, but Councilwoman Del Pepper said the name was a legacy of the area’s boggy origins.

“This was called Swamp Fox and the reason was because it was truly a swamp,” Pepper said. “The only people who believed in it was Dayton Cook and Hoffman, because if all you have there is a swamp you have to dream big. It’s a most appropriate naming because Hoffman had a lot, if not everything to do with the development of that area, East Eisenhower.”

The City Council unanimously agreed to the change, though some lamented the loss of the strange name on a prominent road through the Hoffman Town Center.

“I just wanted to say Swamp Fox has always brought a smile to my face but I have no opposition to this,” said City Councilman Canek Aguirre. “It’s good to recognize Mr. Hoffman, but hopefully we can bring Swamp Fox back somewhere in the area.”