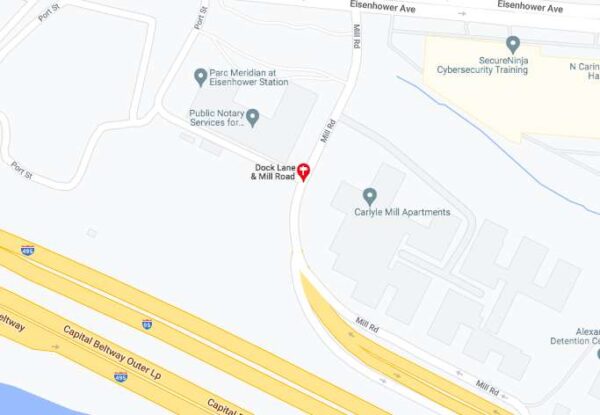 Updated at 2:30 p.m. on Thursday, September 1: A man fell to his death off a roof of an apartment building on Tuesday afternoon, according to the Alexandria Police Department.

The incident occurred at around 3 p.m. near the intersection of Mill Road and Dock Lane — at the four-story Carlyle Mill Apartments complex.

The man was identified as Rosalio Esquivel Ramirez, 29, of Hyattsville, Maryland.

The man was part of a work crew on the roof of a building when the incident occurred, APD spokesman Marcel Bassett told ALXnow. Bassett did not confirm from which building the man fell.

“It’s believed he was working on the roof, where he fell off several stories,” Bassett said. “The preliminary investigation suggests that it was an accident.”

Bassett said that the man fell between four and five stories. He was declared dead en route to the hospital.

Police tweeted that there is a heavy police presence in the area, and that the incident is under investigation.

Notification:: In response to an individual involved in a fatal industrial accident, there is a heavy police presence in the 2100 block of Mill Road. APD is investigating and will provide updates when available. pic.twitter.com/KbnUm5tv3i