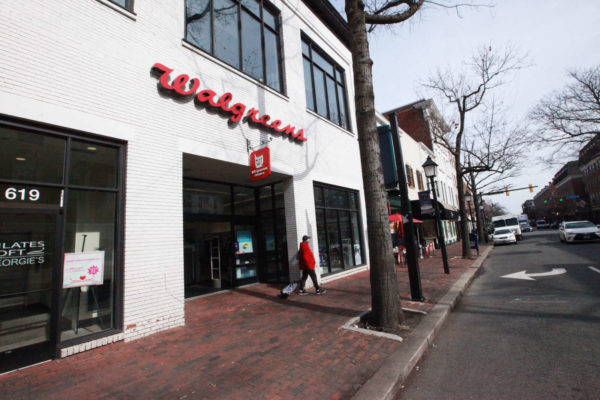 The days may be numbered for a pair of buildings in the heart of Old Town as developers move forward with plans for demolition and redevelopment.

Developer The Silverman Group is headed to the Planning Commission next month to rezone 615 and 621 King Street, with the ultimate aim of tear down portions of the buildings and replacing them with a new, 24-unit residential building with ground-floor retail.

The Development Special Use Permit filed by The Silverman Group says the plan is to demolish parts of the ground floor for 621 King Street to “restore the retail character of the building on King Street.” The proposal also includes plans to redesign the storefront to reflect historic photos of the site.

At 615 King Street, the plan is to similarly demolish the ground floor storefront and provide new floors that will align with 621 King Street and bring it into compliance with standards of multifamily residential development.

“The integration of the existing buildings with the proposed building will preserve the general character of this area of King Street and allow the buildings to continue to reflect differentiation in outward appearance while creating a cohesion on the interior,” the DSUP said.

The building at 615 King Street was home to Walgreens and a pilates studio. It was built in 1929 but has undergone several alterations over the years. The Burke & Herbert Bank at 621 King Street, meanwhile, was built in 1906 and the facade has remained basically intact.

The DSUP also notes that the developer is asking for parking spaces for the building to be reduced from 25 to 0.

“The Applicant proposes to redevelop the property with a four-story building that will include 24 residential units and approximately 6,452 square feet of ground floor retail,” the DSUP said. “The building will include a roof deck, a portion of which will be a green roof, as well as outdoor terraces for the upper-level units. Given the site’s proximity to public transit, the Applicant proposes a parking reduction to zero spaces for this use.”