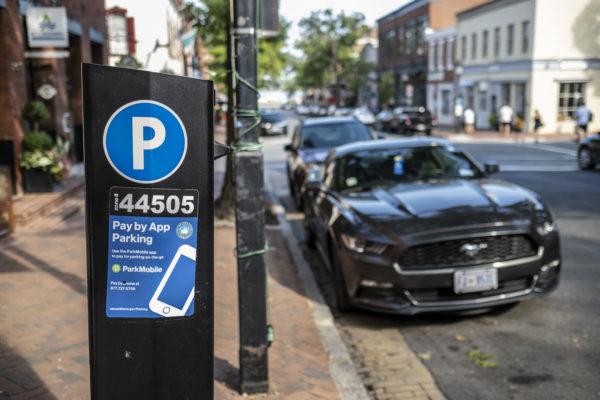 (Updated 5 p.m.) Next week, the City Council will review a set of new parking rates (Item 19) for Old Town that aim to push drivers off the street and into the city’s underutilized garages.

The new ordinance would expand the area of Old Town where drivers who don’t have residential or guest permits must pay by phone to park. The current rate in those zones is currently $1.75 per hour, but the new ordinance would allow the Director of Transportation and Environmental Services to set a rate of up to $5 per hour.

One of the changes being considered would adjust rates based on times of day or day of the week. Rates would also be higher in the pay-by-phone zones to push drivers to meters or the garages. At the same time, garages could be changed to an hourly rate less than the rate at the meter — still $1.75 — with different rates at different garages.

The core issue behind the change is that the city’s parking garages are largely underutilized. The average occupancy sits at around half the garage capacity.

The spike in December is the Scottish Walk and Boat Parade, with before and after for Thanksgiving and Christmas.

A city report said that the Courthouse Garage, in particular, has “a lot of capacity” on evenings and weekends.

The item is scheduled for first reading at the Tuesday, June 14 meeting, followed by a public hearing and a vote on Saturday, June 18.