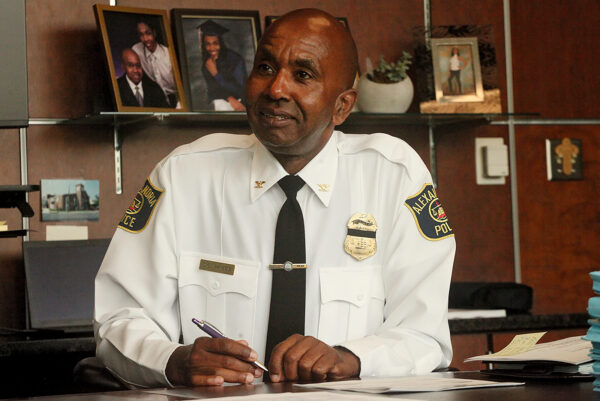 Hayes spoke with ALXnow in his office before the fatal stabbing of Alexandria City High School senior Luis Mejia Hernandez, and also before APD announced last week that due to short-staffing that it is reducing its services to the community. Officers will no longer respond to calls for service that fall under another agency’s responsibility or respond to old crime scenes that show no danger to the public.

“I think they’re needed now,” Hayes told ALXnow — on needing officers in schools. “My hope would be one day we won’t be needed, that we won’t have to go to the schools, and that will be great. I think that’s what they’re working towards, as far as putting this community advisory group together, and figuring out what can they do better to deal with all the safety issues that they might be having in the schools. We’re willing to help them with that so that one day we don’t have to have SROs in the schools, and they can be taken out of the schools and be back out in the neighborhoods, and we can really continue to do our community policing part.”

Hayes wants school resource officers will be returning to Alexandria City High School’s two campuses next school year. SROs have not been at the ACHS King Street Campus after two officers were placed on leave and are still under investigation for allegedly having inappropriate sexual conversations with a former student.

SROs were briefly defunded by City Council last year, and then brought back after student fights and multiple violent events with weapons prompted ACPS leadership to successfully plead for their return.

Hayes’ office is still relatively sparse, with his desk and walls sparingly adorned by photos of his family, as well as recognitions from the city for decades of service. He has even changed rank insignias as a personal preference — wearing colonel eagles instead of the four stars traditionally worn by chiefs.

In the meantime, Alexandria is experiencing a rise in larcenies and thefts this year, and there have been four homicides.

Hayes was officially sworn into office last month after being the acting-chief for a year. He plans on shifting the department to what it looked like before it was restructured under his predecessor, former Chief Michael Brown, who resigned abruptly last year, by hiring an additional assistant chief.

The job has also meant some personal changes for Hayes. He was forced to hang up his role as the pastor at Oakland Baptist Church, where he sermonized for 15 years.

Hayes is married with two adult children, and has lived in the city for 30 years. A native of Washington, D.C., Hayes followed his older brother Clarence into the U.S. Air Force, where he became a military police officer. After being discharged and returning home four years later, he kept on a uniform by joining the Alexandria Police Department in March of 1981. He has a degree in business and finance from Norfolk State University, a Master’s degree in management and leadership from Johns Hopkins University and a Master’s in divinity from Liberty University.

ALXnow: What is your position on policing in schools?

Hayes: I think they’re needed now. My hope would be one day we won’t be needed, that we won’t have to go to the schools, and that will be great. I think that’s what they’re working towards, as far as putting this community advisory group together, and figuring out what can they do better to deal with all the safety issues that they might be having in the schools. We’re willing to help them with that so that one day we don’t have to have SROs in the schools, and they can be taken out of the schools and be back out in the neighborhoods, and we can really continue to do our community policing part.

ALXnow: How is the pandemic affecting the department right now?

Hayes: We are trying as best we can not to go backwards. The majority of the staff have taken advantage of the vaccinations. The other ones are going with the city protocol, as far as being tested, on a weekly basis, if they have not been vaccinated. We haven’t seen an uptick in any of our COVID cases. We might have maybe one a week. The hard challenge is you don’t know when it was contracted. You don’t know if it happened while you’re on the job, at home. There’s no way of knowing, but the officers are still taking the precautionary measures that they’ve always taken as far as keeping the distance when they go on calls for service.

Hayes: I can say without hesitation that I’m looking to go back to a more familiar structure. We can’t have deputies at an assistant chief level that could run bureaus that we need to have in order to ensure we have the appropriate accountability to make sure that we’re the most efficient and effective police department that we have.

ALXnow: Is it difficult to run the show under the current structure?

Hayes: It is very difficult. I mean, I did it. I was the assistant chief over top of criminal investigations, and patrol. And I wouldn’t be here some days at eight o’clock in the morning, and I couldn’t leave until about 10 o’clock at night. And that was on a daily basis because there was so much you have to do.

ALXnow: How is the city doing with assaults by mob and gang violence?

Hayes: We’re seeing more assault by mob incidents. It could be five people that jump on one person, as opposed to the gangs that we know exist throughout this entire Northern Virginia area coming in with specific targets, the ones we’re looking at now.

A lot of times they are crimes of opportunity. They’ll see you walking down the street by yourself. And it will be five guys, and talk to the guy, or whatever, and (they will) say, ‘Look, can you give us whatever,’ and they will assault the person, because sometimes people resist and things like that. So, we don’t associate it all with gangs, it’s just people taking advantage of what they see as an opportunity.

ALXnow: Is there any kind of a plan to put SROs back into Alexandria City High School?

Hayes: Well, we have to because in the upcoming budget, they have put the staffing back in there. And so we have to now do a process to get officers who want to go into the schools, and then send them to school to be trained, so that we can have them ready, hopefully for the next school year.

ALXnow: How do you and your officers feel about the rollout of body worn cameras this summer?

Hayes: I can tell you that the officers want them… They really want the cameras, they’ve been wanting them for a long time. For the city manager to be able to find the funds to do this is fantastic.

ALXnow: You’re a pastor. Are there any passages of The Bible that come to mind for you?

Hayes: Yes. Galatians 220: ‘I have been crucified with Christ; it is no longer I who live, but Christ lives in me; and the life which I now live in the flesh I live by faith in the Son of God who loved me and gave Himself for me.’ I live by that because he gave himself for me. Now I give myself for others.