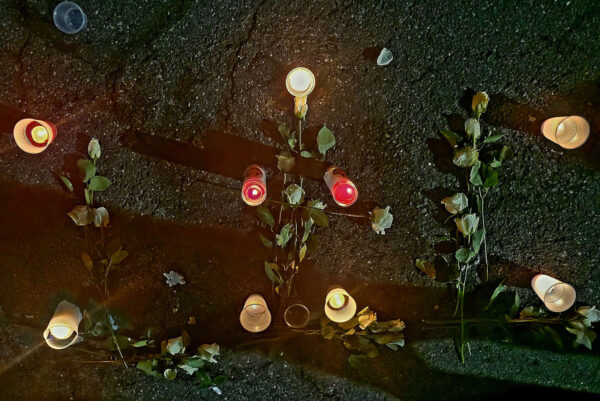 (Updated 2:30 p.m.) Friends of Luis Mejia Hernandez say he didn’t have to die.

More than a dozen of the Alexandria City High School senior’s friends paid tribute to him on Thursday night (May 26) with a candlelight vigil at the spot in the Bradlee Center parking lot where he was fatally stabbed on Tuesday afternoon. Many of them witnessed the fight, and say that police didn’t do enough to prevent the death.

“Police were literally walking right behind everyone before people started throwing punches,” said one student, who produced videos and photos of the incident on his phone. “They literally let everything happen.”

The Latino students said that they did not trust the police, and had not yet shared the information with them. One video showed a steadily escalating scene with police officers walking around groups of students along King Street — before the incident occurred.

No police sirens were used before and immediately after the stabbing, and police struggled to break up the fight, according to video obtained by ALXnow. There were about 30-50 Alexandria City High School students involved and no arrests have been made in connection to the incident.

Police say that they responded appropriately, and are not at fault in their response. Police are also not currently investigating their response to the incident.

At the vigil, some of the students smoked weed and drank tequila — with police in cruisers observing but not engaging from a short distance away. Many of Hernandez’s friends burst into tears while talking about him. Some even left small plastic cups with tequila on the ground next to prayer candles and flowers.

The students did not respond when asked about what prompted the brawl.

“Something is always happening here (in the shopping center),” another friend of Hernandez said. “There was three police cars here. Why didn’t they call more officers? The police station is right there. This was unfair, this could have been prevented, no problem. It didn’t even have to happen.”

A GoFundMe for Hernandez has raised more than $20,000. His friends say that next week his father will take his body home to El Salvador, where his mother lives.

“He was a senior, like me,” one girl said. “He was going to graduate. He so looking forward to getting out of school this summer.”

Some of the kids involved were getting milkshakes at the Beeliner Diner in the shopping center. Owner Noelie Rickey said she provided police with security footage from the day of the incident, and that teenagers drive away her customers during lunch and after school hours.

“Our business has been down all week,” Rickey told ALXnow. “Obviously people are hesitant to come to the shopping center right now… And customers have learned to stay away when the kids are out and not in school.”

Alexandria City High School sent students home after the incident and transitioned to virtual learning for the rest of the week.

Superintendent Gregory Hutchings, Jr. says that police are providing additional high-visibility patrols in school zones, and that there will be support team members available for students when school reopens on Tuesday after Memorial Day.

Hernandez’s death marks the city’s third homicide of 2022 after a murder in the Foxchase neighborhood and a teenager killed in an alleged attempted carjacking in Potomac Yard earlier this month.

END_OF_DOCUMENT_TOKEN_TO_BE_REPLACED

More Stories
Poll: Have you been impacted by the baby formula shortage?Just Listed in Alexandria