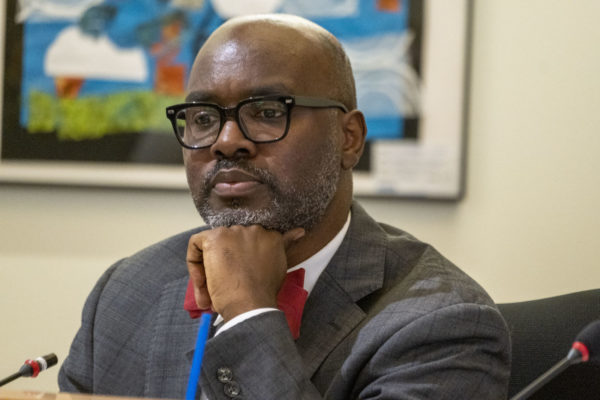 Alexandria City Public Schools Superintendent Gregory Hutchings is making a case for critical race theory (CRT) and abolishing policing practices, although not within the school system he manages.

In an opinion piece published by EducationWeek on April 6 (Wednesday), Hutchings said that school systems need to employ six steps if they want to “embrace” building an anti-racist school or school system. In “The Anti-Racist Counternarrative Public Education Needs Now: Six steps for escaping the trap of attacks on ‘critical race theory’“, Hutchings wrote that most public school educators never heard of the term before it became politicized during the 2020 election cycle.

“It has become so extreme that many states are banning books, rescinding policies, and dismantling curriculum,” Hutchings wrote. “School systems are faced with political strategies to dismantle equitable practices and policies and take our public educational systems back to before the civil rights era if we do not pay attention and react methodically, strategically, and unapologetically.”

Virginia Governor Glenn Youngkin, a Republican, heavily campaigned against critical race theory, which is an increased study into racism and its effects on society. ACPS has not taken an official stance on CRT, and said that Hutchings’ comments do not reflect the opinion of the school system.

“This is an opinion piece from a national perspective and it speaks for itself,” ACPS School and Community Relations Chief Julia Burgos told ALXnow.

Hutchings wrote that ACPS works closely with police to keep schools safe, and that a half hour of “social-emotional learning time” has been incorporated into the school division.

“Policing is a controversial national discussion, and schools are not immune to this controversy,” Hutchings wrote. “Discipline for BIPOC (Black, Indigenous, and people of color) students has mirrored some policing practices that have contributed to the prison pipeline for decades. From zero-tolerance policies to arrests in schools for disciplinary infractions, U.S. public schools have harmed BIPOC students by implementing disciplinary policies derived from policing. A focus on the social and emotional needs of students, including restorative practices, instead of suspension and expulsion practices, is key to abolishing policing in schools.”

Policing in schools has been a controversial subject in Alexandria, after the City Council went against Hutchings’ recommendation and defunded school resource officers. Funding for the $800,000 SRO program was diverted toward mental and behavioral health resources for ACPS, but after a marked increase in violent events going into the 2021-2022 school year, Hutchings’ successfully pleaded with City Council for their reinstatement.

Many of the points are included in Hutchings’ recently released book, which he wrote with Georgetown University professor Douglas Reed. The first chapter of “Getting Into Good Trouble at School: A Guide to Building an Anti-racist School System”  is devoted to the T.C. Williams High School name change to Alexandria City High School, which was accomplished through a lengthy community process. The book has eight chapters on various subjects, including “Know Your History to Rewrite Your Future”, “Commit to Racial Equity”, “Make School Discipline Different From Policing” and “Choose Good Trouble: Be a Bold and Courageous Antiracist School Leader.”