New city documents outline plans to close the end of King Street until at least November.

The closure of the unit block of King Street — the very end by the waterfront — to vehicle traffic is docketed for review at a Planning Commission meeting on Thursday, April 7. 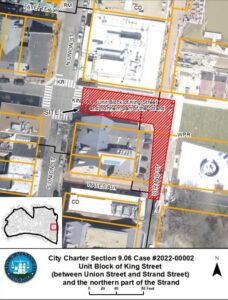 “The City proposes to temporarily close the unit block of King Street, between Union Street and the Strand, and the northern portion of the Strand, between Wales Alley and King Street, to vehicular traffic between May 28 and November 20, 2022,” the staff report said.

The proposed temporary closure follows the permanent closure of the 100 block last year. Since that time, the report said vehicle traffic on the unit block has declined.

After the Planning Commission meeting, the closure will be reviewed by the City Council later in April.