Alexandria could be converting another block of King Street to a pedestrian-only zone this spring.

At a meeting of the Waterfront Commission earlier this week, city staff presented both plans for a pilot to close the waterfront end of King Street and examined the future of the 100 block of King Street, which has been permanently closed and converted into a pedestrian zone.

Transportation Planning Division Chief Christopher Ziemann said a pilot to close the first block of King Street — called the unit block — would be a three-month program and would run from Memorial Day to Labor Day. The closure would also hook around to close part of The Strand. 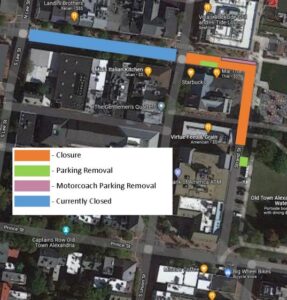 The closure would still allow for emergency vehicles and maintenance vehicles to access the block but would be closed to other traffic. The closure would also eliminate some park spaces along both King Street and The Strand.

During the pilot, Ziemann said staff would check in with stakeholders, monitor the closure’s impact, and collect public feedback.

Waterfront Commission member Nathan Macek led a vote to support the closure pilot, but with the refinement of some of the parking, deliveries and crosswalks sections. The motion passed with only City Council member Sarah Bagley abstaining because it would be headed to City Council for a vote.

“We’re working on implementing short-term improvements to make this block a little nicer while we wait to see if we can turn this into a capital project for the future,” North said. “We had some ARPA money allocated to this block, so we’re using that money for these projects.”

There are currently metal barricades along the block, but North said the city is looking at adding bollards in the future. Long term, North said staff are looking at putting future improvements together as a capital project to be budgeted accordingly.

A more short-term change, North said, is making the curbside pickup and loading zones on Lee and Union streets — currently implemented as a temporary measure — permanent. North said this change would also let the city put up more permanent signs to show that these are no parking areas intended for loading and curbside pickup only.

“In the past, we’ve had some problems with the signs we put up disappearing, so we’re working on different sign text to put up there,” North said. “Those would probably be installed in the next month or so.”

As the city refines the pedestrian zone, Macek said he hopes the city does more to push car parking further by a car length or two from the intersection of King and Union streets.

That creates a pedestrian visibility hazard at what are two very busy crosswalks on both the north and south side of King Street at the Union intersection. The more we can get rid of cars at that immediate intersection, the easier it becomes for people to cross and not feel like you’re trying to dodge out in front of a car parked right there… Let’s be realistic about this. We’re talking about space for one person to park their car versus hundreds of people who walk through that intersection. It’s not like we’re saying we’re getting rid of all the parking in Old Town by doing this. We have to be willing to say the benefit of one person being able to park their car there for a few hours is overridden by all of the people who cross there who would benefit.

While North said city staff is hesitant to recommend anything that could result in more parking loss, they would look into it. Waterfront Commissioner Gina Baum warned that Old Town residents could likely object to any further loss of parking in the area.

END_OF_DOCUMENT_TOKEN_TO_BE_REPLACED

More Stories
Alexandria may have found its Comcast competitorsLegal Review: How to Avoid Collision With 18 Wheelers