Alexandria City Public Schools is sticking with its proposed 10.25% salary increase for all employees, and Superintendent Gregory Hutchings, Jr. says that number will not change based on potential guidance from Governor Glenn Youngkin.

“Regardless of what the governor says or does, we have positioned ourselves to continue to increase compensation for our staff,” School Board Chair Meagan Alderton said at a budget retreat last week. “This is the type of proactive intentional work that will, I think, makes us successful to be able to sustain what it is we’re trying to do right now.”

Last month, outgoing Governor Ralph Northam, a Democrat, proposed raising teacher pay by 10.25% in Virginia’s new two-year budget, all made possible by billions in federal Covid relief funds. Youngkin, a Republican who was sworn in earlier this month, said he wants raises for teachers.

Youngkin is under fire for ending the mask mandate in public schools, and Alexandria and neighboring Fairfax and Arlington Counties have rejected that order.

“Whether (Northam’s proposal) continues to move forward or not, we will still be proposing the actual market rate adjustment and step increases,” Hutchings told the Board.

Should Youngkin accept Northam’s plan, it’s likely that localities throughout the state will try to hit that 10.25% increase over the next two years or else risk losing significant state revenues, ACPS Chief Financial Officer Dominic Turner told the Board.

The fiscal year 2023 $345.8 million combined funds budget is comprised of the $316.2 million ACPS operating fund, $17.6 million from the grants and special projects fund, and a $12 million school nutrition fund.

ACPS will conduct a public hearing on the Combined Funds Budget on Jan. 21, followed by a joint City Council/School Board Subcommittee meeting on Jan. 24. The School Board is expected to pass it (with revisions) on Feb. 18, and then go to City Council for deliberation until it passes the city’s budget in early May. 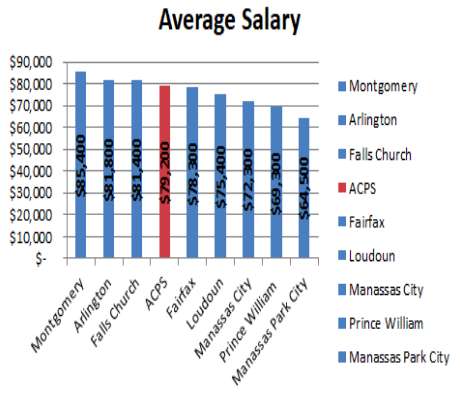