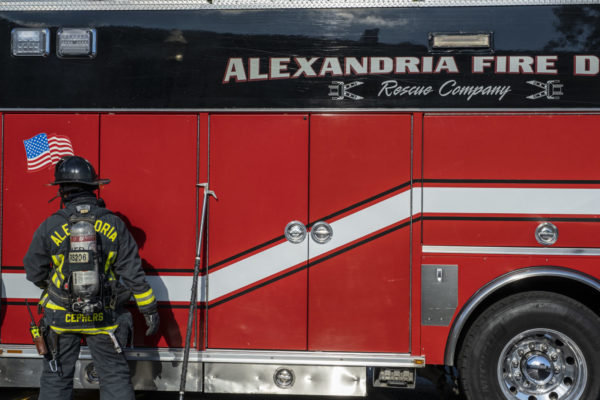 After concern that his officers were working too much overtime, Alexandria Fire Chief Corey Smedley temporarily put an engine out of service on Sunday night (Dec. 19).

The move was enough to prompt the International Association of Firefighters’ Local 2141 to put out a public safety alert on social media.

Smedley said that fire apparatus go out of service all the time for a number of issues, including training, maintenance, and community outreach events. Still, he said, staff have continued to express concern over working mandatory overtime, and says it is impacting their lives, from “child care issues to mental exhaustion.”

“I was also concerned about some who were on shift and approaching maximum consecutive work hours,” Smedley told ALXnow. “Considering all of these factors and the high rate of those working mandatory overtime, the Fire Department initiated a portion of its continuity of operations plan by placing Engine 205 out of service at 7 p.m. on December 19 to relieve some of the pressure on our workforce.”

The unions tweeted that such reductions are now common occurrences, and that other closures have been made in recent months.

This is another response reduction in recent months which includes the closure of the Rescue 209 in Potomac Yard/ Del Ray, and the downgrading of service at Medic 207 located at Duke Street and Quaker Lane.

AFD is currently understaffed by 23%, with 281 first responders working in a department that needs 347 to be fully staffed. Just last week, the union stated that AFD’s staffing issues put lives and property at risk in a Dec. 4 fire in Crystal City.

The engine returned to service the following day.

“Based on our data, this was the least impactful timeframe of the day for call volume,” Smedley said. “We ensured advanced medical service was covered across the city by moving the engine’s paramedic to Truck 205 and informing our mutual aid partners of the temporary change in operations.”

Alexandria City Public Schools will provide synchronous, virtual learning Thursday after a Winter Weather Advisory was issued warning of up to 2 inches of snow in the morning. Class times…