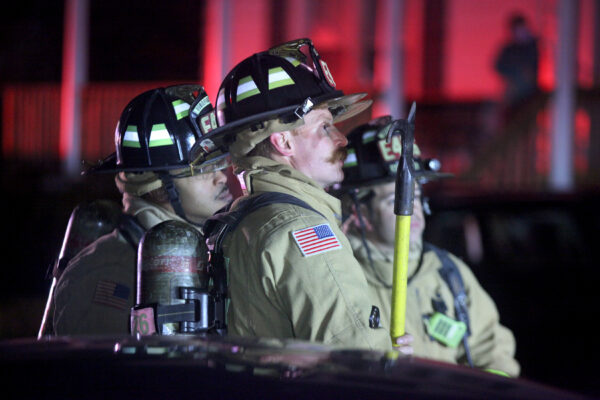 Understaffing within the Alexandria Fire Department put people and buildings at risk during a fire at Crystal City’s restaurant row on 23rd Street earlier this month, according to two unions representing more than 500 Alexandria and Arlington firefighters, medics and fire marshals.

In a sharply worded press release on Friday, Dec. 10, officials from the International Association of Fire Fighters Local 2141 and IAFF Local 2800 wrote that AFD’s inability to fully staff their department led to “multiple close calls” at a fire on Saturday, Dec. 4, in the 500 block of 23rd Street. No one was injured in the blaze, which caused $1.8 million in damages.

“The City’s been playing with fire for awhile now” said Josh Turner, President of Local 2141. “It’s an unnecessary game of Russian roulette putting lives at risk, solely due to the City’s inability to recruit and retain employees for our department.”

A Rescue Company from Fairfax County instead had to to report to the scene.

“The initial call should have had a minimum 12 firefighters dispatched for tasks like putting up ladders, forcible entry and search and rescue. Instead there were only 8 dispatched,” said Brian Lynch, President of IAFF Local 2800, representing uniformed members of the Arlington County Fire Department. “That is the equivalent of fielding a football team with only a portion of your offensive line. The job got done this time, but we cannot be putting families, businesses and firefighters at this kind of risk.”

Lynch continued, “Firefighters conducting fire attack and searching the second floor for victims encountered extreme and nearly deadly fire behavior, which forced them to rapidly evacuate. Eventually the second floor collapsed. Luckily, firefighters on the scene from other functions like EMS or standing by to rescue trapped firefighters were able to help with some fire operations. But we should not be relying on that, especially for a call like this – both businesses were occupied at the start of the fire, thankfully there were not multiple patients, or firefighters that could not rescue themselves. This could have ended very badly.”

Alexandria’s Rescue Company has been reportedly been understaffed since August 12.

“We’re in a challenging space right now.,” Smedley said. “We need more resources, and we’re working toward that. But the community will get responded to and they will have the appropriate people there to mitigate their emergency. At the same time, I need to make sure we have the appropriate staffing for first responders so that they can also have the confidence that they’re going to be taken care of in those very risky situations.”

Smedley also said he’s been concerned with the number of hours his people are working, and recently reduced the maximum number of consecutive hours they are allowed to work.

There are now 281 first responders within AFD, Smedley said, and the the department needs 347 to be fully staffed. As it stands, there are 27 recruits in the Fire Academy, and they are scheduled to graduate in the first quarter of next year. Smedley said he hoped to hire 30 more recruits to get additional relief.

Smedley will soon travel to Arlington, Texas, where Parajon is the outgoing assistant city manager. There, he says, he will talk to the fire chief about lessons learned and best practices to get things moving forward in Alexandria.

Video from the S. 23rd Street fire in Arlington. https://t.co/0KkWkRp5Nx