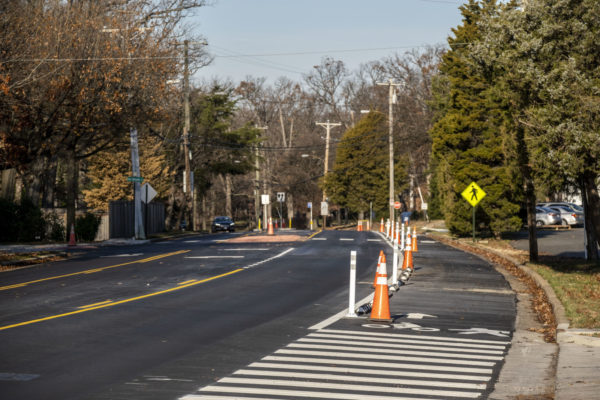 In a meeting with the Transportation Commission, city staff said earlier reporting about the city axing the city-wide feedback form for the Complete Streets program sounded “scary”, emphasizing instead that the city will be focusing on feedback more local to the affected areas.

Quick refresher: Complete Streets is an Alexandria program that aims to redesign roadways for the benefit of all users, with pedestrians and cyclists in mind along with motorists. The program stirred up some local controversy over plans to reduce travel lanes on Seminary Road in favor of bike lanes.

The form in question here is a city-wide feedback form meant to collect public responses to Complete Streets proposals. But, as might be expected given some of the intense debates over a couple of earlier Complete Streets programs, the city said it was finding that the feedback collection was being bogged down with responses that might not have been relevant to the streets in question.

“The Complete Streets policy was adopted in 2011, began this feedback form in 2018 to get feedback from residents,” said Transportation Planning Division Chief Christopher Ziemann. “This hasn’t worked as well as we thought.”

“Discontinuing [the] feedback form frees up resources to focus more targeted engagement on these types of projects,” Ziemann said.

Staff at the meeting said the decision is about how the city allocates its resources.

Alex Carroll, an urban planner with the city of Alexandria, explained the decision:

What we end up doing is either A. taking all hands on deck approach on [Complete Streets], which pulls away from other projects, B. rush projects into a short timeframe, or C. we end up having to delay the surfurfacing of the street which results in frustration with residents who just want their potholes fixed.

“The headline is very scary, that ‘the city doesn’t want your input’ but it’s a little bit more nuanced than that,” Carroll said.