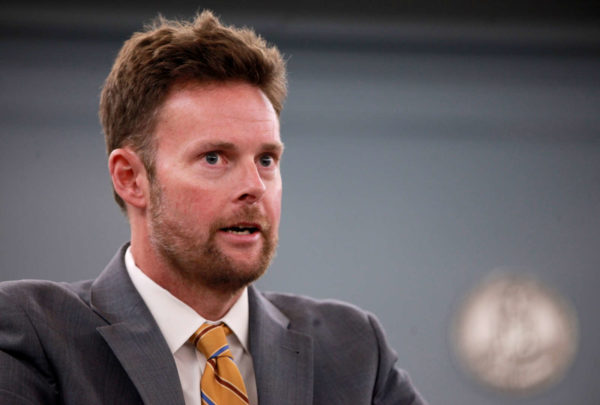 Bryan Porter says he must be doing something right.

Porter, the Commonwealth’s Attorney in Alexandria, just won an uncontested reelection as a Democrat for his third term.

“I must be doing something right,” Porter said of the election. “Hopefully it shows that I’ve got the right blend of forward-thinking policies, and that I help keep the community safe.”

“When I first got elected, an elected politician who will remain nameless told me, ‘Hey, you just got just got elected. Don’t screw this up,'” Porter told ALXnow. “That was his mantra. I like to think that eight years in I haven’t screwed it up, and my goal is to leave the office with its reputation intact, so I can hand it off successfully to whoever comes after me.”

Porter continued, “Remember that I’m just one small drop of water in the ocean of Commonwealth’s Attorneys.”

Porter, who has tried 11 murder trials and more than 50 jury trials, would also go on to write a children’s book in 2019. He is credited with founding the Alexandria Mental Health Initiative and the Alexandria Treatment Court as alternatives to jail for people with mental health and substance abuse issues.

“I’m very humble about the whole thing,” Porter said of the election. “And the only reason I’ve done so well is because my predecessor, Randy Sengel, left me very good office without hardly any personnel issues or policy issues. I’ve got really good people working for me, we seem to do a pretty good job of recruiting and getting really good people to work.”

Porter lives with his wife in Old Town. He got a degree in political science from Virginia Commonwealth University, and briefly served as an Alexandria Police Officer. He went to night school at the George Mason University School of Law, and was hired as an Assistant Commonwealth’s Attorney in 2001.