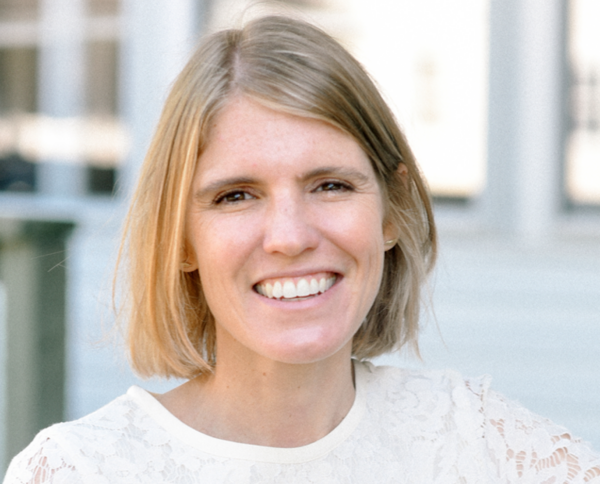 Ashley Simpson Baird says widespread unfinished learning within the Latino community is a result of the pandemic, and the District B candidate for the Alexandria School Board wants the city’s school system to refocus its attention to get kids back on the ball.

“We are still very much living in schooling in a pandemic, and so I would really like to see ACPS have a stronger plan for how we’re addressing unfinished learning,” Baird told ALXnow. “We need to make sure that we are giving school leaders and educators the resources to implement that plan.”

Baird, who is married with three young children, was an ESL and bilingual education teacher for six years. She’s now the founder and principal of Merit Research, Policy, and Evaluation, a private firm that provides data-driven research and solutions to educational organizations around the country.

Baird was the captain of the women’s varsity soccer team at Pennsylvania State University, where she graduated with a bachelor’s degree in arts, letters and sciences.

“I think people trust me,” she said. “I’m really good in emergency or high-stress situations. You want me to take your penalty kicks. I probably won’t make that many penalty kicks in practice, but if it’s in a game or a shootout, like I will make my penalty kick every time.”

Baird spent two years in Bolivia in the Peace Corps, and received a master’s degree in teaching at the School for International Training and a doctorate in education from the University of Virginia.

“The pandemic shed a light on some disparities for these ESL students in particular, like how they were served during remote learning,” she said.

Baird has known since she was a teacher that she was going to run for a School Board.

“It’s just a pretty great way to make an impact on your community,” she said. “I feel like there’s a great alignment with my knowledge and skills and what I can offer.”

Like many candidates, Baird says the school system should have opened to full-time instruction sooner than August 24. She also says ACPS has had communication problems for years.

“I think it was brought even more to the forefront during the pandemic when a lot more of our community started paying closer attention to the schools,” she said. “In December, ACPS put out this survey that asked parents if they’d like their kids to return to hybrid or stay virtual, and the messaging around it was that the results were non-binding, just to do a pulse check. But then it ended up being binding when they went back hybrid in March (2021).”

She says Superintendent Gregory Hutchings, Jr.’s performance has been mixed, and supports the current Board extending his contract through 2025.

“Continuity in the superintendency is very important at this time,” Baird said. “We we are at a time where we need a lot of things to get done. It’s better to have that continuity instead of a gap or to go with an interim for a period of time.”

Baird says Board Members should have staggered terms so that future situations don’t arise where a mass exodus of members end up leaving at the same time.

“That would be a good solution and provide more continuity for our board in terms of the learning curve,” she said.

Unlike many of her fellow candidates, Baird supports limited colocation of affordable housing on ACPS grounds — provided that it’s for educators.

“The possibility for co-location cannot be dismissed outright as libraries, recreational facilities, and other educational services with smaller footprints can enhance educational programming when they are co-located with schools,” she wrote on her website. “I would support programs that assist ACPS employees with down payments and/or lower rate mortgages (such as Landed).”

“The right question is how do we keep students and staff, emotionally and physically safe when they’re in our school buildings?” she said. “I think we need to take a step back and say what does safety and physical and mental well being in our schools look like and create a plan from there.”