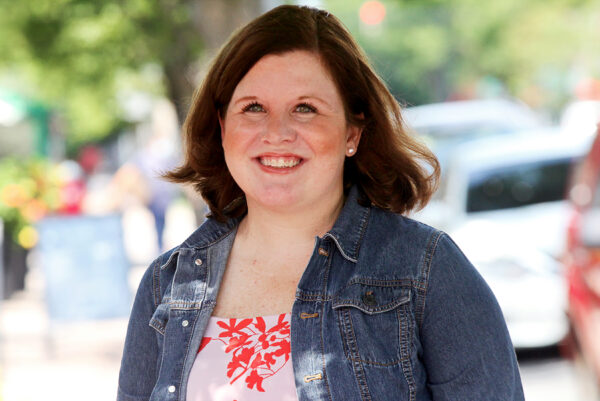 “My son was my hero during the pandemic, and he just had to do a lot of adult things,” Westfall told ALXnow, fighting back tears. “He had to be very resilient, brave and strong and use executive functioning skills that most adults haven’t mastered in their professional and personal lives. But my son said to me, ‘Mom, you should do it. You should. You should run.'”

The Alexandria District B School Board candidate also says that her career advising boards and managing billions in federal grants for the U.S. Department of Health and Human Services qualifies her in understanding how to navigate the complexities of a school system with more than 15,000 students.

Westfall is also one of the eight moderators for the Open ACPS! (Alexandria City Public Schools.) We want a CHOICE! Facebook page, which has severely criticized ACPS for its handling of the pandemic.

She faces six other candidates for the three open slots on the nine-person Board: Deborah Ash, Kelly Carmichael Booz, Ashley Simpson Baird, Tammy S. Ignacio, PreeAnn Johnson and Ricardo Roberts. She says she was inspired to run when all of the incumbents in her district decided to not run for reelection.

“It’s a decision that I didn’t take lightly,” Westfall said of deciding to run for office. “When I heard that none of the incumbents were running in district B, it kind of piqued my interest.”

Westfall gives the school system a 5 out of 10 for its performance since last year, and says students should have been moved back to full-time instruction sooner than the beginning of this school year, August 24.

“I think that ACPS had everyone’s best intentions in mind, but there were opportunities when the community spread was low, the weather was nicer to bring students back or to bring certain certain groups of students back, like kids with disabilities in particular,” she said. “For me, the main thing was the communication. I know that not everyone felt safe to come back to school. But I think that there were opportunities for those kids who needed in-person learning to come back to school.”

Professionally, Westfall is the supervisory grants management officer at the U.S. Department of Health and Human Service’s Administration for Children & Families. In that role, she manages grant specialists and oversees $9 billion in discretionary grant funding for underserved communities across the country.

“I spent my entire professional career advising boards,” she said. “A lot of people say, ‘Well, you’re not an insider, you’re not experienced.’ I have a lot of external experience. I didn’t have to go the PTA route… I’m considered an expert in working with boards on problem solving tasks.”

A native of St Louis, Missouri, Westfall graduated with a Master’s in social work from the Brown School at Washington University in St. Louis and a Bachelor’s in the arts from the University of Missouri-Columbia.

“I advocate that the board materials need to be provided at least a week in advance of the (School Board) meetings,” she said.

Westfall is against the colocation of affordable housing on school grounds, although supports that colocating schools with City resources like recreation centers and health centers. She also said that the initial City Council decision defunding school resource officers was made without data, and that it went against the wishes of the school system.

“There was not a lot of community input into that decision making process,” Westfall said. “And I think that happened because we’re in a pandemic.”