Update 9/21 p.m. — A previous version of the article had a typo in Division Chief Carrie Beach’s quote

Housing preservation is a central pillar of the plan to save Arlandria-Chirilagua from the anticipated gentrification stemming from Amazon’s HQ2. Last week, city staff told the Planning Commission that effort will likely require at least $100 million from public and private sources to preserve or expand affordable options in the area.

“Diversity and culture is a thread that weaves its way through the entire plan,” said Carrie Beach, the division chief for neighborhood planning and community development. “The proposed housing policy at its core strives to preserve the ability of existing residents to stay in their neighborhoods.”

Beach said that the economic analysis of the housing situation in Arlandria gives the city an idea of what they can reasonably expect in terms of community benefits stemming from additional density and private development. Beach said private sources of support, like developer contributions in exchange for added density, will have to be supplemented by non-profits and federal grants.

“In this case, housing affordability is the highest priority, biggest price tag, and largest portion of community benefits,” Beach said. “The maximum we can expect from private sources… will have to be supplemented by many other sources.”

One of the biggest projects currently planned to that end is the Alexandria Housing Development Corporation’s proposed 500-unit affordable housing structure in Arlandria. Beach said the proposed AHDC project represents a significant investment in affordable housing in the area, but it’s still just a start.

Currently, Beach said the city is estimating $100 million dollars in “community benefit dollars” from both public and private sources to help invest in expanding Arlandria’s affordability.

“The housing challenges in the Arlandria community are immense and require nothing less than an all hands on deck approach,” said Tamara Jovovic, a planner with the Office of Housing. “We set an ambitious affordable housing target with the 2020 housing contributions policy update: an expectation of 8% of net new development to be affordable at 60% [of area median income]. Here, it’s 10% of new development at 40-50% area median income (AMI).” 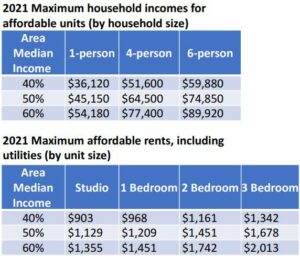 Jovovic said that the realities of trying to finance units make producing anything at 30% AMI nearly impossible.

“We heard loudly importance of 30% AMI units, but to be candid, challenge of producing 30% AMI units is immense,” Jovovic said. “To boil it down to the economics of the building, 30% AMI rents can’t cover costs of operating building, much less cost of building [financing].”

Jovovic said that the city is working with the Department of Housing and Urban Development for permission to prioritize existing Arlandria residents — something typically not allowed under fair housing law, but Jovovic said the city is applying for an exception.