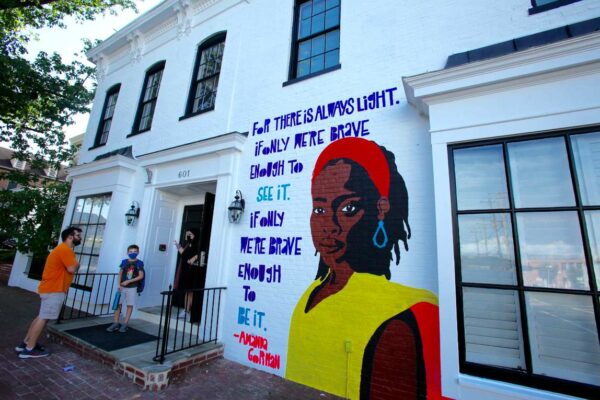 Kristin Carpenter’s services are in demand.

This month, she and her team opened The Linder Academy at the corner of S. Washington and Gibbon Streets in Old Town, joining their smaller McLean location, which opened in January.

Right now, she’s got 24 students in McLean and 52 at the Alexandria campus, and when the latter is built out it will have 13 classrooms and be able to hold just over 100 students.

“I never thought I would want to run a private school,” Carpenter told ALXnow. “But as a research specialist and a teacher, it was nice that there was no bureaucracy and we could just teach the kids. We don’t have curriculum contracts, so we could just pick the best materials and the best methods and teach with super small class sizes and problem-based learning — things that just aren’t options at big schools, and we really had a great time with it.”

Still under construction, the Old Town school is located at 601, 607 and 609 S. Washington Street and 710 Gibbon Street. New murals of famous authors and civil rights icons with quotes have been painted on the exterior walls to show the essence of the school’s philosophy.

Carpenter launched Linder Educational Coaching in Arlington in 2008, and focused mainly on interventions outside of school with tutoring and after-school programs.

“But when COVID hit, we just realized there were a lot of parents that needed support,” she said. “My biggest concern was early childhood literacy. Even with the best teacher in the world, you’re just not going to learn on an iPad.”

The school, which costs more than $28,000 a year in tuition, specializes in working with students who struggle with learning disabilities and traditional school settings. Children spend the early part of the day with the most cognitively demanding classes, like math and English, and they day becomes less regulated in the afternoon for electives.

There are six-t0-nine students in each class, Carpenter said.

“I would say weaknesses in social skills is one of the biggest things that we are seeing,” she said. “Outside of that, I think overall that their writing skills are very weak, and that wasn’t helped by being able to type or do voice-to-text this past school year. You know, the actual act of being able to write is important.”

Carpenter said she had no plans to open additional schools in the future.