Alexandria is experiencing mural mania, as three new murals have been painted in Old Town. It’s more than just a splash of color on the walls, too.

Pacers Running at 1301 King Street is celebrating their 30th anniversary on October 7 with the official unveiling of their mural. Designed by D.C. artist Katherine Campagna, the mural reads the Pacers logo, “FOR EVERY RUN” in italics, as if the letters are running down the street.

“For every run has been our motto across the board during the pandemic,” Pacers manager Victoria Sanchez told ALXnow. “It’s helped bring people together and make them happy outside. We wanted the mural to be big and to be seen.” 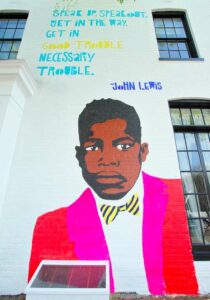 The art is much more ethereal at ESP Tea & Coffee at 1012 King Street. The mural in back of the shop was painted by Zen Xaria of Baltimore, and is all about the sixth sense.

“The flower is our logo for ESP, which stands for extrasensory perception, and the eye represents the third eye,” barista Cordelia McGale told ALXnow. “The petals are open, implying that the third eye is open. If you look at the fox, two of it’s eyes are glazed over, but the third eye is in focus.”

McGale continued, “I think this place is an oasis in Old Town. Things seem to be very white collar, and this place is breaking out of the norm and feeding into the creative side of the human psyche.”