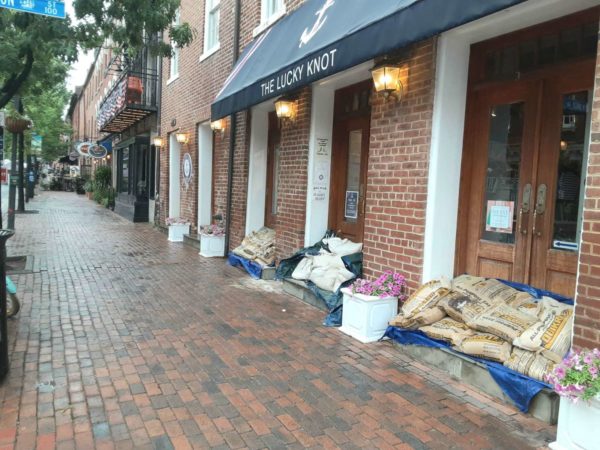 Alexandria is under a Flash Flood Watch until Thursday morning, as the city has given away sandbags and cleared storm drains in preparation of remnants of Hurricane Ida.

The Flash Flood Watch is in effect until 8 am. Thursday.

Ida, which is now a tropical depression, will slowly weaken as it moves northeastward.

“However, IDA will continue to produce heavy rain along the path into Thursday,” the National Weather Service advised. “Therefore, the WPC (Weather Prediction Center) has issued a High Risk of excessive rainfall from the northern Mid-Atlantic/Northeast through Thursday morning. The associated heavy rain will create widespread areas of flash flooding.”

Be Weather Aware Today (Wed) & Tonight! Tornado and Flash Flooding Threat. Be ready to act if NWS warnings are issued for your area. Also be aware of ongoing flooding in some locations along the I-95 corridor this A.M. If you encounter a flooded road, Turn Around/Don't Drown. pic.twitter.com/P60d8wy684

The City handed out sandbags to residents yesterday in anticipation of the storm.

Additional thunderstorms with heavy rainfall are expected across the area this afternoon and evening. Rainfall amounts of 2 to 4 inches are expected, with localized amounts up to 6 inches possible.

The Group DrainALX has also tweeted its frustration over the city’s stormwater management. On Tuesday, it posted a quote from a resident who says that there is no way to plan for big storms.

I’ve heard something similar to this more than a few times. Be safe out there today, friends.#residentreports #intheirwords #DrainALX pic.twitter.com/jYbXQaWPaK

Read more →
More Stories
Pedestrian struck and killed on N. Beauregard Street in West EndAsk McEnearney: Are there benefits to listing my home on the MLS vs. selling it privately?