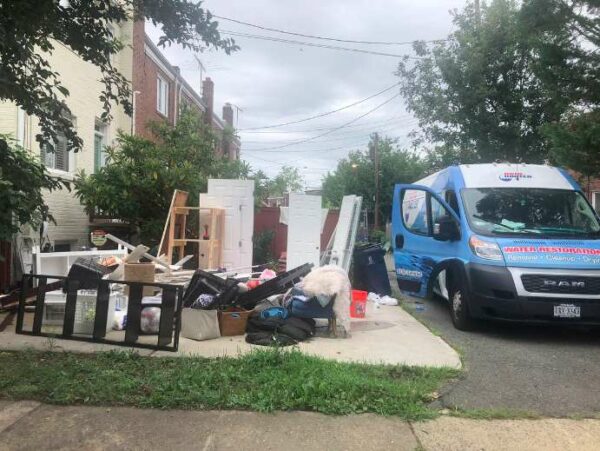 (Updated at 3:15 p.m.) Alexandria is under a Flash Flood Watch until 3 p.m. Monday (August 16), after areas of the city were hit by a massive rainstorm Saturday.

The National Weather Service reports that up to four inches may fall during the late morning and mid-afternoon, resulting in “rapid rises on streams and creeks and in urbanized and poor drainage areas.”

“Showers and scattered thunderstorms are expected to develop just after daybreak Monday morning and persist through the first half of the afternoon,” NWS said. “The stronger thunderstorms may be capable of producing 2 to 4 inches of rain per hour.”

Saturday morning’s storm brought upward of five inches of rain in less than an hour, and many residents voiced their discontent on social media.

“We cannot continue to live this way,” a resident wrote on Nextdoor. “This is sham(e)less. Instead of doing your pet projects, get the shovels in the ground and get this poop fixed. How many times is enough? Apparently more than I can tolerate.”

Alexandria announced on Aug. 13, the day before the deluge, that it will accept applications for its new Flood Mitigation Pilot Grant Program on Monday, August 30. Property owner can get a 50% reimbursement (up to $5,000) for flood mitigation projects at their homes.

“Applications will be accepted on an ongoing basis,” the city said in a release. “View a recorded virtual information session to learn more about the program.”

Alexandria dealt with multiple flooding events in the summer of 2019, and this year City Council doubled the stormwater management fee for residents to tackle backups throughout the city, most notably in Rosemont, Del Ray and Old Town. The City is also spending $1.9 million in flash flooding spot improvements throughout the city as part of its American Rescue Plan Act funding.

Mayor Justin Wilson advised residents to document the damage so that the city could direct resources to those areas of the city.

“For those who were impacted by overnight flooding and sewage backflow, please report your experiences to @AlexandriaVA311 so that we can ensure these incidents are documented,” Wilson tweeted. “Understanding the extent of the impact helps us direct resources. Stay safe.”

pics friends are sharing of the flooding in parts of Del Ray last night are CRAZY! #AlexandriaVA pic.twitter.com/JJSA7dtwNF

pics friends are sharing of the flooding in parts of Del Ray last night are CRAZY! #AlexandriaVA pic.twitter.com/JJSA7dtwNF