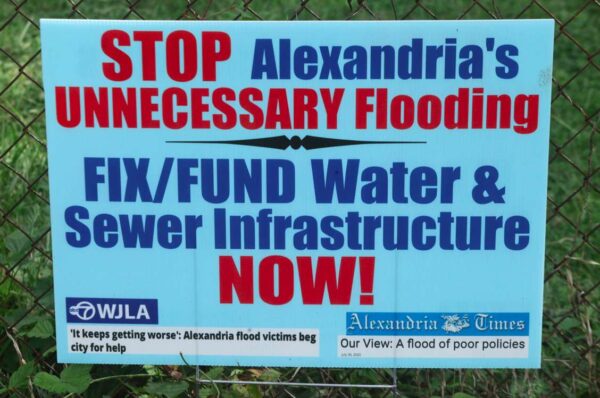 Danielle Reynolds has actually gotten therapy because of the summer flooding of her Del Ray basement. The family is stuck in a quandary, as moving away isn’t affordable, but neither is spending tens of thousands to continually redo their basement.

“I’ve sought therapy to deal with this, because you can’t move away,” Reynolds told ALXnow. “You can’t afford to buy another house in the area, you love where you live, your kids are friends with all the kids in the neighborhood. You just feel really stuck, and unfortunately there’s not a whole lot that I can do.”

She continued, “I have to have my basement stripped and all my walls redone. It’s comical how many times this has happened. This is the second or third time I’ve had to sink tens of thousands of dollars to repair my basement. I just had the handyman here and he’s telling me right now it’s over $10,000 just to tear out the walls.”

In what’s becoming a summer tradition at the Reynolds house, she and her family spent the early hours of Sunday cleaning out the basement with bleach to kill any mold. They moved into the corner town home on E. Alexandria Avenue at the end of 2018, and just seven months later were hit with historic summer flooding.

Like many neighbors, she has a sign in her front yard that says, “STOP Alexandria’s UNNECESSARY Flooding… FIX/FUND Water & Sewer Infrastructure NOW!”

“You don’t get to wake up on Monday and say, ‘Well, I can’t go to work because I have to clean up my basement,'” Reynolds said. “You’re dragging the next day because you have to stay up all night long baling buckets of water out of your basement stairwell to prevent the back door from bursting in.”

Reynolds, a clinical psychologist with Del Ray Psych and Wellness, says it’s hard juggling family responsibilities while her house is under water. When mid-to-heavy rainstorms strike, the alley behind her home exhibits fast-moving waist-high water that often ends up destroying everything in her back yard and flooding her basement.

“It’s no longer usable,” she said. “There’s no point in having a basement.”

Reynolds said she had no idea about the flooding when she and her family moved into the neighborhood.

“It would be safer for us to move somewhere else,” she said. “And you’re going to lose a lot of residents. There are all these beautiful estates in the city, but we can’t even have a long-term investment because of the amount of damage that’s been done.”

For faster reporting, please download our Alex311 app, available in the Apple & Google Play Store. When reporting flooding, please use the Flooding Concerns and Inquiries service request type, which will ensure your case is expedited & routed to the most appropriate department. pic.twitter.com/xxMeYWxoZB