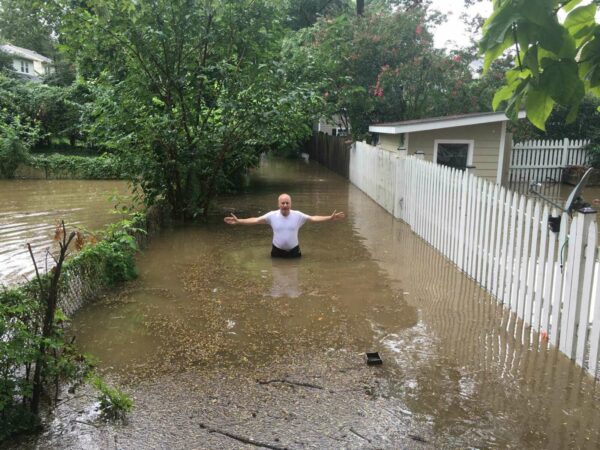 Alexandria Sheriff Dana Lawhorne is fed up and says the city’s stormwater management is a disaster. On Sunday, Lawhorne said he was helping a neighbor in Del Ray pump water out of his basement until 4 a.m.

“It’s the same summer repeated over and over again,” Lawhorne told ALXnow. “I’ve got basement damage and my shed in the back is destroyed. Whenever we get a big storm you’ll see two-to-three feet of water rushing into the back alley and our house gets engulfed with floodwater. It’s not sanitary.”

Sunday’s storm dumped five inches of water on the city in less than an hour. The city’s stormwater system gets overrun after rainfall of about three inches.

Mayor Justin Wilson says city staff are looking into which stormwater projects can get fast-tracked, and that money is not the problem.

“We’re exploring ways to accelerate execution of the plan, but more money is not the most significant need,” Wilson told ALXnow. “I am heartbroken for the residents and businesses impacted by this flooding. No one should have to fear for their safety and financial well-being every time it rains. I wish we could implement all of these projects tomorrow, but unfortunately they take time. These are very significant projects. We are working to accelerate these efforts as quickly as possible, as well as identify other ways to reduce the impact on our residents.”

Lawhorne says that City Manager Mark Jinks is at fault for underfunding flooding projects for years, and that the city keeps reliving the same summer over and over. Last summer, for instance, there were several major storms that resulted in the doubling of the stormwater management fee for residents to tackle backups, most notably in Rosemont, Del Ray and Old Town.

“Why do we tolerate this?” Lawhorne said. “I give the City Manager a D- for his unwillingness to pay attention to this issue prior to 2020, until the stormwater system crumbled and there was the political will to do something. I’m glad they’re making improvements now, but their plan falls short of accomplishing what needs to be done sooner rather than later.”

Lawhorne continued, “We will continue to pay the price for the next 10 years, just as we saw this last weekend. It’s been a year since all that flooding last year and we haven’t moved the needle. Where’s the results? I’m not saying we have to get them overnight, but good grief.”

“It’s a shame to see this over and over again,” Chapman said. “I completely understand the frustrations of residents impacted by small, medium and large storms. We need to adjust and take care of this crisis situation.”

Alexandria announced on Aug. 13, the day before the deluge, that it will accept applications for its new Flood Mitigation Pilot Grant Program on Monday, August 30. Property owner can get a 50% reimbursement (up to $5,000) for flood mitigation projects at their homes.

One resident said on NextDoor that she spent more than $16,000 on drainage systems in her yard last year.

“I know I’m not alone in being frustrated by our flooding and infrastructure issues in Alexandria,” the resident said. “The city of Alexandria NEEDS to address and fix our flooding problems now.”

Lawhorne says he gets frustrated when he hears officials call for patience.

“They say that it’s a 100-year storm, and that it’s just Mother Nature,” he said. “The people who say that must live at the top of the hill.”

TES Operations crews have been cleaning up from this weekend's storm. They will work 12-hour, 24/7 shifts this week. This ramped-up status will enable us to respond to any weather events this week (we are monitoring two Tropical Storms) while we continue clean up. pic.twitter.com/1oz35wNX9F