The Office of Historic Alexandria (OHA) is working through a new project that will help educate on a period of the city’s history rife with confusion and upheaval: last year.

In an office where items considered artifacts are usually arrowheads or ship timbers, City Historian Daniel Lee said his office has started a different kind of collection.

“We’ve started a collection of artifacts from the pandemic, like masks and signs,” Lee said. “It’s to chronicle, to a large extent, messages about how quickly things changed; whether that’s wearing masks or social distancing and washing hands. It’s at times difficult to remember where we’ve come from and how the pandemic has changed how we do our daily lives.” 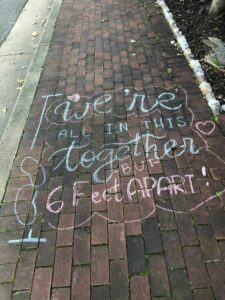 The scope of that preservation work extends beyond the pandemic. Lee said the OHA has also been collecting items and stories from the Black Lives Matter protests.

“Obviously, pandemic isn’t the only thing that’s happened in the last year-and-a-half,” he said. “The fight for racial justice, especially since the murder of George Floyd, that initially caused us to collect artifacts related to the protests of George Floyd, but it’s become a larger project called the Black Lives Remembered project with a focus on racial justice in the larger context.”

Lee said the work on preservation has a two-fold goal: for those who lived through 2020 to look back on the last year, and to help future generations understand what life was like.

“The experiences we’re going through are historic,” Lee said. “That’s worthy of collecting and worthy of remembering, and hopefully that things change.”

Recognition of historic times as they’re being lived through can be sort of a mixed bag, Lee said. There are plenty of relics from the founding of the Lyceum in 1838 or the launch of Alexandria’s library network. Lee said those were thought of, even at the time, as history-making.

“As time has gone on; we have a tendency to not think in terms of how future generations will remember us, that’s not our chief concern,” Lee said. “We have an oral history project, which has existed since the 1980s. A lot of times what surprises me is that people who have done a lot in the city don’t think their experience as history. Schools desegregated during their lifetimes, isn’t that a big deal? It’s hard when you’re living through it to think about the future.”

Another example is the 1918 Spanish Flu epidemic, which Lee said had an impact in Alexandria, but there wasn’t much local recorded or saved from when it happened.

For Lee, the work of preserving what happened over the last year has taken on a new importance.

“During the pandemic, my wife and I had a son,” he said. “And it’s difficult to think: what is he going to think years from now? There’s a sharpness to COVID. The first few months were incredibly scary. We’ve collected oral histories of the experience of people in the first few months. One of the things we’re interested in is that period of getting vaccines and people thinking we’re done, and then the Delta Variant comes up.” 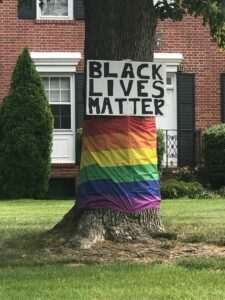 The racial justice component strikes a particular chord with Lee, he said, in showing both how far the city has come and how much work there is to do.

“Having a child changes the way you think about everything,” Lee said. “It gives me a desire to make a better world for him. Doing research in history and realizing where we’ve come from, when we talk about Benjamin Thomas being lynched… this is a much friendlier place for my son, who is a person of color, but that doesn’t mean that everything is done. There’s still more work to be done and having a child as motivation reminds you, in a selfish way, to make the world a better place.”

For daily life in the OHA, that change has been about adapting to a more digital landscape while maintaining physical locations open as much as the changing health landscape allows.

“We had to close our museums,” Lee said. “We reopened some of them in March, but they’re open at a lower capacity. We have not been able to do the events and rentals that we count on, in large part, for our revenue. It’s caused us to be creative.”

The pandemic caught the OHA in the middle of a series of extensive capital improvement projects.

“Fort Ward, the Alexandria Black History Museum, Gadsby’s Tavern Museum, the Lyceum, Stabler-Leadbeater Apothecary Museum — almost all had renovations of some sort,” Lee said, “the most extensive being the Freedom House Museum.”

The Freedom House Museum opening has been pushed back from the original schedule to open it this spring, but Lee said the current plan is to open it by the end of the year.

“In the past, our constituency was people who could come to museums and sit in libraries,” Lee said. “But now, with digital services, that allows us to reach people for a variety of reasons who don’t have the transportation options to go to our sites. We have so much more content online than we did before.”

Lee said the tactile, in-person component will remain important, but the shift toward online has allowed for more opportunities, like lectures and online committee meetings that might not have been possible in-person.

“That’s allowed us, for example, to have a Cal State University professor speak in a virtual lecture for Pride Month,” Lee said. “That gives us access both to an audience and lecturers and contributors who don’t have the time and don’t have the money to come to Alexandria.”

With Hispanic Heritage Month coming up in September, Lee said the new online approach will allow them to have a guest-lecturer from Santa Clara University to talk about an Alexandria-specific topic.

“Normally would have to pay for them to come here and pay for hotel,” Lee said, “and while this isn’t ideal, it allows us to have a broader audience and larger selection of possible speakers.”

One of the major redevelopment project is the re-roofing of the Murray-Dick-Fawcett House (517 Prince Street). Built in 1770, it is one of the oldest homes in Alexandria.

“We acquired it four years ago,” Lee said. “It’s one of the best-preserved old houses, and the closest to its original state.”

The challenge with work on a historic home, as the Lee-Fendall House is experiencing with efforts to repair a garden wall, is that the work needs to be done by someone familiar with historic houses and historic roofs specifically, otherwise you risk an Ecce Homo situation. Lee said the work is estimated to be finished by December 2021.

Another major milestone for OHA was the dedication of the Contrabands and Freedmen Cemetery Memorial as the newest site in the National Park Service’s African American Civil Rights Network.

The Fort Ward museum has been closed since the start of the pandemic, initially due to COVID-19 concerns but more recently for building renovations.

“They are doing continual interpretive work involving installation of new markers at the fort and orienting displays involving the Civil War and fort community that followed,” Lee said. “We’re not sure when they’ll be done, but certainly within six month timeframe.

One of the most bizarre updates, however, is that the ship timbers discovered in Old Town in 2018 will be re-submerged until the city figures out what to do with them. The ships are currently required to be kept doused in water to maintain their structural integrity.

“The ship timbers going to be moved to Ben Brenman pond,” Lee said. “We’re going to have divers secure it until we find a permanent solution, whether that’s a new museum or something else.”

Lee is also working on an oral history commemorating the anniversary of the Alexandria Hospital, which first opened in 1871.

“We’re working on an exhibit in collaboration with the hospital,” Lee said. “The part that’s interested me the most so far is interviewing former doctors, board members and nurses at the facility.”

In the meantime, Lee encouraged any locals interested in finding out the latest on the city’s past to stop by some of the local museums and attend OHA events online.

“We are still open, you can still come to our museums,” Lee said. “You still have to wear a mask, but we’re still open and excited about sharing Alexandria history. We’re still doing work; whether putting more things online, putting together exhibits, or working on buildings. If you liked us before, keep coming back.”