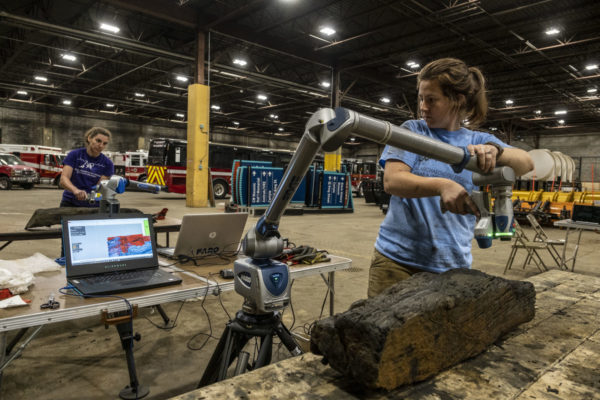 Several largely-intact ship hulls found underground in Old Town a few years ago could see new life in a proposed “Waterfront Museum” in the early stages of consideration in the upcoming budget.

The possible museum could house and display the timbers of at least one of the four-total ships found under new developments in 2018.

To be clear: the idea of the museum is still in its nascent stage. A feasibility study to “assess the viability” of the potential museum.

In addition, in FY 2022 $125,000 is requested to conduct a Waterfront Museum Feasibility Study to assess the viability of a history center as recommended in the Waterfront History Plan and the Waterfront Area Plan. If supported, the museum would house items such as the conserved ship timbers of an 18th century merchant ship and associated artifacts excavated as part of the Robinson Terminal South and Hotel Indigo construction projects.

Derelict ships were often used part of the foundation when the city was expanding its waterfront at the end of the 18th century. One of the most intact ships was once a cargo freighter, with holes showing where certain Caribbean worms had eaten away at the wood and dendrochronology indicating that the ship’s timbers were originally from Boston and had been cut down in 1741.

The discovery of the ships made national headlines, with the relatively intact state giving archeologists a chance to analyze artifacts from the city’s heyday as a port.

The timbers from the ships were shipped to Texas A&M for further study and preservation — mainly involving the slow extraction of water from the long-buried timbers and careful treatment to ensure the frames don’t lose integrity in the process.

A scale model of the ship is available in the Alexandria Archaeology Museum on the top floor of the Torpedo Factory Art Center, but the museum would be too small to house timbers from the ship, which is around 25 feet wide and 46 feet long.

According to the budget memo:

$102 million over the ten-year CIP to support the design and construction of the Plan-recommended infrastructure, including flood mitigation, prioritized through community engagement processes. Projected construction costs have increased due to further scope refinement, further design development, and market drivers. Cost estimates have been escalated to anticipated mid-construction date. The most significant changes were due to more detailed design for stormwater and pumping system, structural bulkhead, and electrical infrastructure. The current CIP budget is funded at approximately 50% of the current cost estimate. Alternative strategies and value engineering studies are currently underway. The design-build process will likely include further alternatives analysis and cost development to facilitate a firm budget. It is anticipated that the CIP budget request will be further refined after the project alternatives and value engineering process is complete.

The waterfront items are part of a larger FY 2022 budget discussion scheduled for the April 8 Planning Commission meeting.

END_OF_DOCUMENT_TOKEN_TO_BE_REPLACED

More Stories
Join more than 5,000 ALXnow newsletter subscribersNortham signs ‘Get Skilled, Get a Job, Give Back’ program into law at Northern Virginia Community College