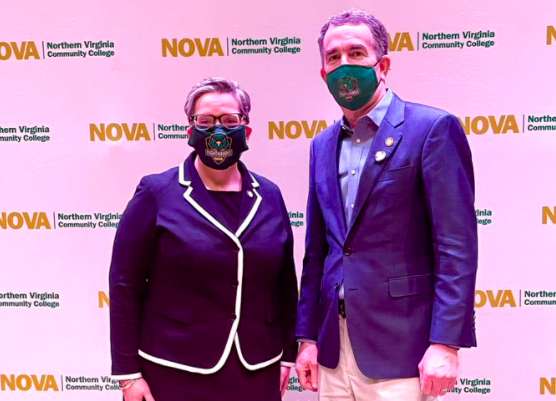 Governor Ralph Northam was in Alexandria Monday to sign into law a $72.5 million initiative making tuition free for low and middle-income students who pursue high-demand jobs.

Northam was flanked by democratic legislators today when h announced at Northern Virginia Community College that funding for his “Get Skilled, Get a Job, Give Back” initiative (G3) has been approved. The legislation was initially announced in 2019 but funding was held up doe to the pandemic.

“It’s almost like if our children don’t go to a four year college or university they’re not going to be successful,” Northam said. “But I’m here to tell you today there are thousands of jobs out there and they don’t necessarily require a four year college education.”

The G3 program, which goes into effect on July 1, allows students who quality for full Pell Grants to get $1,000 grants per semester and $500 during the summer to receive a certificate for studying health care, information technology, manufacturing and skilled trades, early childhood education and public safety. Participants will be required to give back two hours of community service, public service, or work experience for each credit hour in which they are enrolled.

Virginia Secretary of Education Atif Qarni said that the initiative is important for vulnerable populations.

“This initiative of G3 is really important for the Commonwealth,” he said. “This is really transformative because it is addressing wraparound services for the most students who are most vulnerable and have high needs, and financial fragility issues.”

Glenn Dubois, chancellor of the Virginia Community College System, said that the impact of the day could not be understated.

Video: Gov. Northam Announces “G3” (“Get Skilled, Get a Job, Give Back”) Program (Includes "$145 million over the biennium to make tuition-free community college available to low- and middle-income students who pursue jobs in high-demand fields") https://t.co/YAxDizME6y

Thank you @GovernorVA for bringing educational dreams into reality for so many Virginia students. pic.twitter.com/GcH3R5C3YC

Earlier today, I visited @NOVAcommcollege to sign legislation creating the G3 program, which will provide tuition-free community college and wraparound support to an estimated 36,000 Virginians pursuing degrees in high-demand fields.