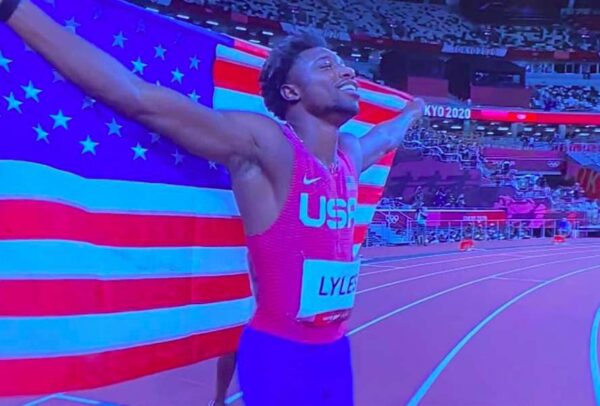 Alexandria sprinter Noah Lyles took home the bronze medal in the 200 meters in the Tokyo Olympics on Wednesday, August 4.

Congratulations to Lyles were tweeted out from all over country, including back at home from Alexandria Mayor Justin Wilson and the Alexandria City High School (ACHS) track team. Lyles is a graduate of T.C. Williams High School (now ACHS) and fulfilled a lifelong dream to compete in the Olympics.

At an Olympic viewing party earlier this week, Lyles’ mother told ALXnow that her son now wants to go on a vacation.

“I think he wants to go to Bermuda, Mexico, and probably a couple other places,” she said.

Congrats to @LylesNoah for bringing home the Bronze and ably representing our City and our nation!

Congratulations, @LylesNoah on bringing the bronze home! We are all so proud in @ACPSk12! Sending love and praise to your family! @josephus_lyles @sunshine182225 https://t.co/ALG3ubYqsw

Congratulations to Alexandria Olympian @LylesNoah on his Bronze Medal! Your hometown is so proud of you! pic.twitter.com/e3S1laIyjF

Read more →
More Stories
School Board: Masks will be required when school starts later this monthAsk McEnearney: How do I make sure our next move isn’t too stressful for our dog?