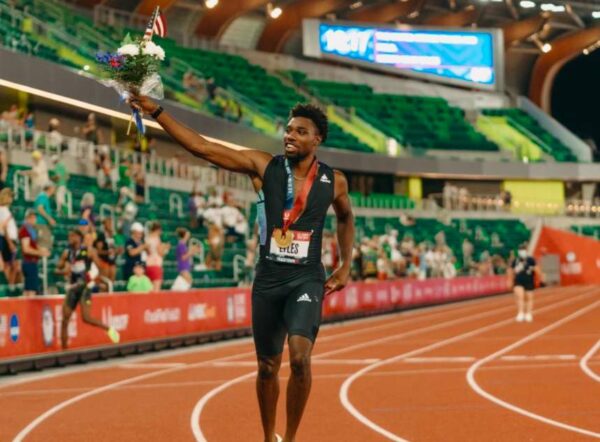 Alexandria’s Noah Lyles is officially on the U.S. Olympic Team after winning the 200 meter race in the Olympic Trials in Eugene, Oregon, on Sunday night.

Lyles ran the race in 19.74 seconds – the fastest time clocked this year in the world — speeding to Tokyo as the second Alexandrian to join the team behind boxer Troy Isley.

The 23-year-old Lyles, a 2016 graduate of T.C. Williams High School, didn’t place in the 100 meter trials, and promised on Twitter that the 200 meter race was going to be “disgusting”. He also plans to run in the U.S. 4×100 relay team, meaning that he could possibly bring home two medals.

Lyles, who was pushed back against competing when the games were postponed last year, gave the commencement address at last year’s graduation at T.C. The winner of four Diamond League trophies told the students that he was bullied in school, and is also dyslexic and an asthmatic.

“Facing those adversities are what got me here today,” Lyles said. “You need to know that you can make it through, because just this time period of 2020 will not be your last, and you can make it to the next one, and the next one and the one after that, and you will look back on the times of 2020 and say, ‘I got through that, and I came out stronger than ever.'”

Keisha Caine Bishop tweeted that the journey to the Olympic team took 10 years of hard work and a lot of support for her son, who won the world championship in the 200 meters in 2019.