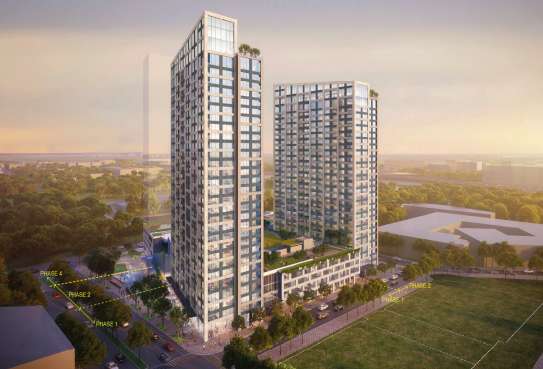 A stretch of the Carlyle neighborhood that’s been mostly empty fields could see its mixed-use development transformation approved over the next month.

The sweeping redevelopment of the east end of Eisenhower Avenue is headed to the Planning Commission next Thursday (June 24) before going to the City Council on Tuesday, July 6.

The plan is to construct four residential tower buildings with around 1,414 units and up to 15,000 square feet of retail. The site will also have a four or five story parking garage and 5 acres of open space.

A permit was originally approved for the project in 2012 as a primarily office-complex, but in 2014 concerns about finding a sizable enough office tenant led to the project being redesigned as residential and retail. The office space was halved and that, along with a potential hotel-use, are being considered as potential uses.

The latest version of the project was submitted for review last July. The project also features a visually distinct garden-design, with the urban greenery sloping down into a recreational field.