“Thank you Alexandria,” Wilson said at Pork Barrel BBQ in Del Ray. “When the voters of Alexandrians get a choice between a list of things that they are against and a positive vision for the future for our city, they choose the positive vision of the future every single day of the week.”

Wilson dedicated his campaign to his mother in-law Diane Crawford-Batt, who passed away last week.

Silberberg conceded at 9:15 p.m. in a phone call to Wilson, who tweeted his thanks.

Wilson received 10,817 votes, or 56.74% of the vote to Silberberg’s 8,247 votes, or 43.26%, with 25 of 31 precincts counted. he said that politics over the past several years has gotten coarser, with more personal attacks against legislators on social media.

“It should not be that way,” Wilson said. “It does not have to be that way… We all have to be better. We have to create a better politics in the city.”

I am honored to have your support.

Together we will ensure that Alexandria is a community that not only survives, but thrives.

The 42-year-old Wilson is married with two children and lives in Del Ray. For his day job, he is a senior manager for Amtrak. He was elected in a special election to Council in 2007 after the resignation of then-Vice Mayor Andrew Macdonald. He lost reelection in 2009, was elected in 2012 and was elected as Vice Mayor in 2015. 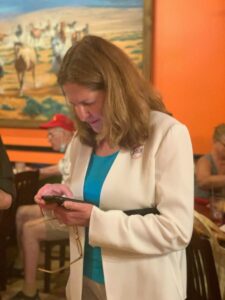 Wilson defeated Silberberg by 1,259 votes in the June 2018 primary, and received 11, 442 votes, or 52.91 percent, to Silberberg’s 10,183 votes, or 47.09 percent. Wilson was vice mayor under Silberberg, who was vice mayor herself for a single term before winning a dramatic three-way primary between former Mayors Bill Euille and Kerry Donley in 2015. Her tenure was marked by lone 6-1 votes, where she and council did not meet eye to eye. Much of the opposition during her mayorship was led by Wilson.

“We fought a very good fight,” Silberberg said. “We had tremendous turnout. We raised a lot of issues that are important to people all across our city… The issues go on. We have a lot at stake, at least in decisions like Seminary Road where there’s no transparency or the slaughter house or housing at school properties. Fighting the good fight to make sure there’s no more flooding. Regardless of that, it’s a heartfelt congratulations. The dream goes on.”

Silberberg ran on a platform of greater transparency in government, “smart” development, environmental sustainability, and against the Seminary Road Diet.

Wilson now faces off against Republican Annetta Catchings in November.