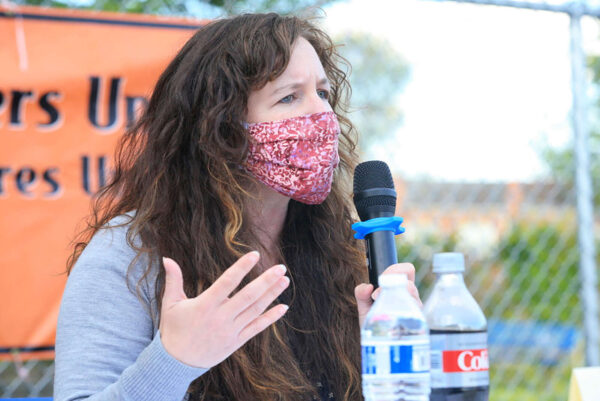 Sarah Bagley has four cell phones sitting on her desk, and promises not to buy a fifth if she’s elected to the Alexandria City Council this fall.

By day, Bagley is the executive director of D.C.-based nonprofit Chisom Housing Group and manages 20 affordable housing communities in 11 states across the country, although none are in the D.C. Metro area. One phone is personal, one is for work and the other two are resident service lines.

“This was a bit of a lesson I learned as a lawyer,” Bagley said. “When everything came through the same device it made it hard to focus. I intend to ask current and past counselors how they’ve managed this balance… There won’t be a fifth phone.”

Bagley left behind her career as an attorney when she the took the job at Chisom six years ago. During the pandemic, she rented a camper van and drove alone to communities under her care in North Carolina, South Carolina and Georgia. She’d sleep in national forests and state parks, and says it taught her a valuable lesson.

“I went to spots I’d never seen before, and it taught me what I could do by pushing myself out of my comfort zone,” she said. “And now I like to camp.”

Bagley, a native of Virginia Beach, received her bachelor’s degree in government from the College of William and Mary and a law degree from the Catholic University of America. Her career includes stints as a judicial law clerk for the District Court of Maryland, and as an associate civil litigation attorney for numerous area firms. She moved to Alexandria in 2016 after spending 13 years in the District, and volunteers with the local chapter of Moms Demand Action and the Alexandria Democratic Committee.

Her top issue is affordable housing, and Bagley says she was inspired to run after Vice Mayor Elizabeth Bennett-Parker announced her intention to run for Delegate and longtime Councilwoman Del Pepper announced she would not run for reelection.

“I really appreciate the history of women serving in Alexandria,” Bagley said. “I want to make sure that we have women on the ballot. Even now, we have 13 candidates in the Democratic primary, and four of them are women. I want to make sure we have those options, and I believe in service.”

“What I have experienced the last six years is that without a safe, sanitary, reliable place to call home as a base, it is exceedingly difficult to address so many other areas in your life where you want to change things,” Bagley said. “We need more housing units in the city. We are seeing the long tail of the Great Recession 10 years ago, and people are not making enough money to live here.”

“These programs are underperforming,” she said. “And for everybody that you can move out of a rental home and keep in Alexandria, you’ve opened up another affordable unit. You get a family into equity, into longterm engagement with the community and less subject to the whims of the rental market.”

She is also against colocating affordable housing on school grounds, and said her work has given her insight into comparable communities, such as in Fargo, North Dakota. There, at The Arbors at McCormick Park, she manages a 186-unit affordable community, where residents pay 30% of their income for subsidized rent.

“I go to these places and hold community meetings, listen and then find local partners to help,” Bagley said. “Sometimes it’s just a summer meals program, but for kids who get their lunches everyday, that’s meaningful for families that don’t have to pay for that.”

Bagley said that, if elected, she will conduct similar community meetings in Alexandria. She also said that she’s ready for long, and occasionally dull Council meetings.

“I gotta tell you, being a lawyer on TV is a lot different, with surprise witnesses and courtroom drama,” she said. “It’s really hours and hours of document review. You build up an attention span that way… The part I enjoy most about my current job is connecting with people, and so, I would expect very much to make more of those opportunities happen.”

The Democratic primary is on June 8.