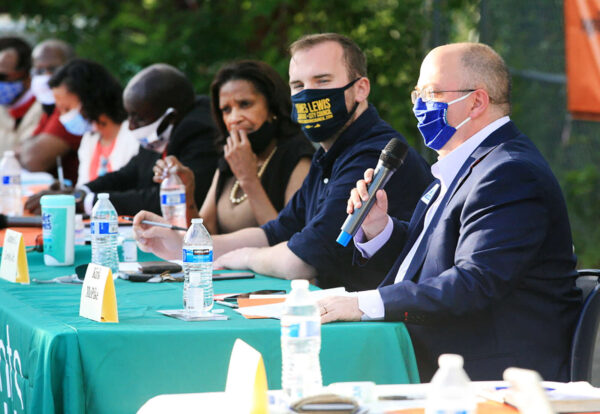 On January 6, Alexandria City Council candidate Kirk McPike was sheltering in place at the U.S. Capitol with his boss, Democratic Congressman Mark Takano.

The world watched as American politics reached a boiling point, and McPike says that the experience was heartbreaking. As Takano’s chief of staff, McPike directed that all staff stay home that day. He and Takano were eventually evacuated to the Longworth House Office Building, where they rode out the proverbial storm.

“It was just Congressman Takano and me in the Cannon House Office Building office,” McPike told ALXnow. “It was heartbreaking to see the the House to be defiled like that, to see the Senate chamber stormed into, and to watch how low it allowed our politics to be pulled in this country is definitely something that never should have happened.”

McPike says he learned a valuable lesson that day in communication. He’d already announced his intention to run for City Council in the June 8 Democratic primary, and says that if elected will hold continual town halls throughout the city to gauge resident input.

“I feel like we have a city full of good people who really do want to do the right thing on the issues that are impacting us,” McPike said. “You know, a lot of the questions we face don’t have just one answer, which makes it complicated and means that we can’t do what we failed to do at the national level, which is really communicate with each other and really understand where each other are coming from.”

McPike, who is leading in fundraising among Council candidates, has been a member of the city’s Budget and Financial Affairs Advisory Committee since 2017, and is the former chair of the Alexandria Economic Opportunities Commission. He says that 2020 was like a gut punch to the City budget.

“We started the year with a great deal of enthusiasm, because the budget was looking good,” he said. “It was like we’d finally escaped the shadow of the Great Recession in terms of city finances. And then the pandemic hit and it was like a punch to the gut, to our people who work here in Alexandria suddenly losing their jobs or having their hours cut, to people who own businesses here suddenly having to serve people out on the sidewalk.”

McPike has said on the campaign trail that he would not vote to undo the Seminary Road Diet. Still, the road diet wasn’t perfect, he said.

“This is one of those issues that highlights the stresses we have in our city where people too often feel talked at and not listened to,” he said. “I feel like we need more communication. We need greater transparency in our government. We need to lower the temperature and have productive conversations where we accept that people are going to disagree on some of the issues, but we also accept that everybody’s coming into the conversation in good faith manner.”

On his leaderhsip style, McPike said he helps people bring their dreams to reality.

“In the Congressman’s office, we empower people not only to do their jobs, but also to give direct feedback to their thoughts to the Congressman or myself,” he said. “When people bring me an idea, I help them bring it fully into reality. And I try to give them the support and trust that they need to achieve the goals set out for them, and so far that I feel like has worked very well for me and for my office on Capitol Hill.”

He has also been a member of the Alexandria Democratic Committee for 10 years, ever since moving to the area to manage the successful campaign of State Sen. Adam Ebbin in 2011. Before that, McPike’s credits include stints as chief of staff to members of the Texas legislature, the Dallas County Democratic party’s field director, and vice president of the Dallas County Young Democrats.

McPike and his husband Cantor Jason Kaufman live in the Seminary Hill neighborhood with their beagle, Punky.