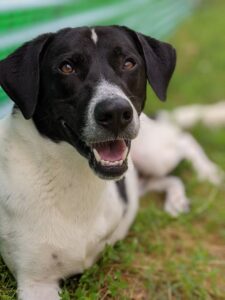 Snoopy is looking for his next Charlie Brown.

The two-year-old black and white hound mix traveled to the Animal Welfare League of Alexandria all the way from Beirut, Lebanon, with the help of Humane Society International.

Snoopy is known around AWLA for his big smile and propensity for sleeping in. It was in Lebanon that Snoopy was hit by a car and the damage was enough that one his front left leg was removed.

“He doesn’t let it slow him down,” AWLA spokesperson Gina Hardter told ALXnow. “Snoopy is the goofiest boy, who loves nothing more than hopping into your lap, rolling around with some favorite toys and, of course, belly rubs.”

You can discover more out about Snoopy by making an appointment at AlexandriaAnimals.org/Adopt-By-Appointment.