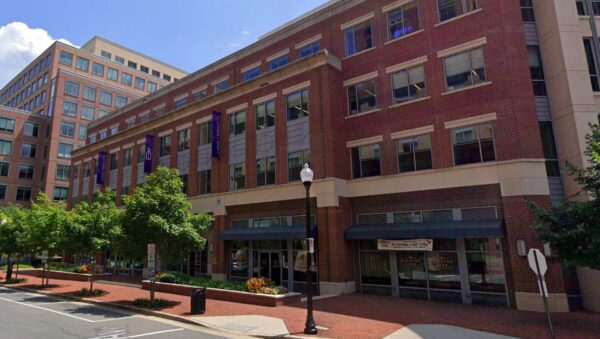 As part of the expansion of Catholic Charities USA’s (CCUSA) expansion into Carlyle, the non-profit is requesting permission to build a cafe and conference center on the ground floor of its 2050 Ballenger Avenue headquarters.

The expansion is part of an application headed to the Planning Commission on Tuesday, June 1. The space is owned by CCUSA and until recently was leased to a restaurant, but the non-profit said in its application that the restaurant closed in January.

“CCUSA proposes to repurpose the space formerly occupied by the restaurant and establish a conference center and cafe in its place,” CCUSA said. “The conference center will be occupied and managed by CCUSA, and will be utilized to host a variety of meetings and events including Board and membership meetings, trainings, and conferences.”

CCUSA said it will also rent out the conference center to third parties on a rental basis, which could help meet the heavy demand for conference space in the area.

“Over the years, CCUSA has received numerous inquiries regarding the availability of conference center space in its building,” the non-profit said. “Organizations that have expressed interest include other nonprofit organizations, community groups in Carlyle, and the Westin Hotel in instances where there has been overflow demand from its existing conference facility. The proposed ground floor conference center will help meet this demand.”

The cafe will offer sandwiches, desserts and beverages and operate as a workforce training program.

“The program will provide workforce training in the food and beverage and hospitality industries to underserved and vulnerable populations, such as the unemployed,” CCUSA said. “The space is well-suited for this use, given the existing kitchen facilities left in place by the former restaurant tenant.”

CCUSA said the commercial kitchen space could be used as an incubator for start-up food and beverage businesses for people from underprivileged communities.