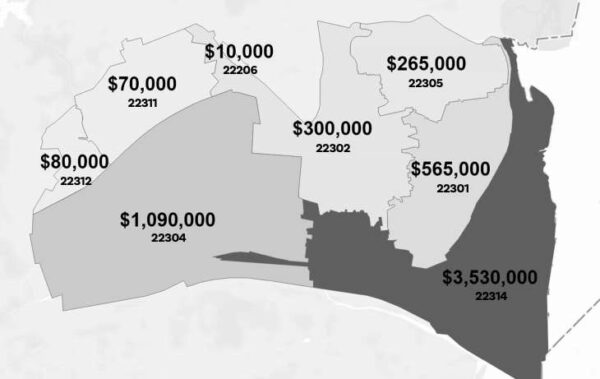 A new report from the Alexandria Economic Development Partnership showed that the 22314 zip code — Old Town and Carlyle — received more funding in business grants than the rest of Alexandria combined.

A breakdown of grant dollars by zip code showed that Old Town and Carlyle businesses received $3.5 million in grant funding. The next closest was the 22304 zip code in the West End, totaling $1.1 million.

That funding would be centered in Old Town isn’t too surprising, considering that’s where roughly 50% of the city’s businesses are located. AEDP President and CEO Stephanie Landrum told ALXnow last year that’s also where around 60% of the grant applications come from, despite an effort by the organization specifically to reach out to non-Old Town businesses and encourage them to apply.

The rest of Alexandria, combined, received $2.4 million in grants.

The grants were fairly evenly split between male and female-owned businesses — 46% and 44% respectively — with 9% not identifying their gender and 1% identifying as trans or non-binary.

Roughly 74% of the funding went to businesses with less than 25 employees, which were a focus of AEDP’s grand campaign.

The report also showed that 47% of businesses that received grants were white-owned, followed by 21% as Asian-owned businesses. Black-owned businesses in Alexandria comprised 11% of grant funding, and Hispanic or Latino-owned only 8%.

Read more →
More Stories
Knife pulled on woman who chases would-be thieves in Old TownAsk McEnearney: How do I begin to understand real estate jargon when buying or selling a home?