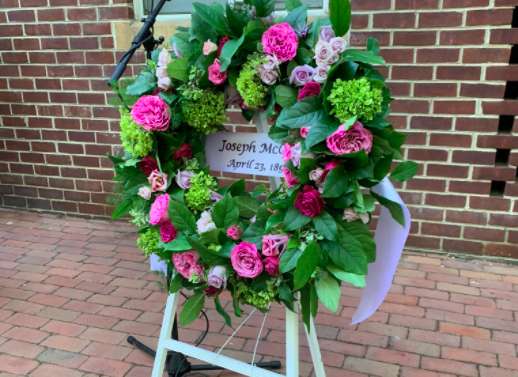 Joseph McCoy was lynched at the corner of Lee Street and Cameron Street in Old Town 124 years ago today. The incident was recognized in a small ceremony Friday morning with a group of residents and Mayor Justin Wilson.

This weekend, City Hall will be lit in purple in memory of the 19-year-old McCoy, who was arrested without a warrant and then murdered on April 23, 1897. A mob of white residents stormed the Police House (now City Hall), where McCoy was being held after being accused of sexually assaulting three women. He was shot, stabbed and hanged from a lamppost.

McCoy’s death is one of two lynchings that took place in Alexandria. The other was 20-year-old Benjamin Thomas, who was shot to death and hanged the following year by a mob of residents in Old Town.

Residents are invited to a virtual lecture on lynching by historian Susan Strasser and poetry reading on Saturday at 1 p.m.

A marker was recently installed at the site. It reads:

On a lamppost at this corner on April 23, 1897, Black Alexandria teenager Joseph H. McCoy was lynched. McCoy’s white employer, Richard Lacy, alleged that McCoy had sexually assaulted his daughter. Similar accusations were routinely used against Black males to ensure domination and provoke racial terror within the African American community. McCoy was arrested without a warrant and held prisoner at the police station, located at present-day City Hall.


After multiple attacks on the station by hundreds of white men, the mob broke through McCoy’s cell door and dragged him one block to this location. They shot him several times, bludgeoned him with an ax, and hanged him. The Alexandria Gazette reported that “other indignities were heaped upon his quivering remains.” Such historically coded language suggested dismemberment, including castration, that was often inflicted on Black males who were lynched, especially in cases involving a perceived indignity to a white female.

Virginia Governor Charles O’Ferrall launched an investigation into the lynching. He laid blame on Alexandria Mayor Luther Thompson for failing to respond to repeated attacks despite knowing the mob intended to lynch McCoy. No officials or law enforcement officers were held accountable and no members of the white mob were ever arrested for McCoy’s murder. Several Black men, however, were arrested based on rumors of retaliation.

Upon viewing her nephew’s body, McCoy’s aunt declared, “As the people killed him, they will have to bury him.” At the funeral, Rev. William Gaines of Roberts Chapel proclaimed, “I trust that the time will soon come when all people will realize the fact that the same judgment which they measure to others will be measured to them at the bar of God.”

Joseph H. McCoy was buried in a pauper’s grave at Penny Hill Cemetery.

124 years ago, a man was lynched in Alexandria on the corner of Lee & Cameron Streets.

Thanks to committed volunteers and our dedicated Office of Historic Alexandria staff, we are telling the story of Joseph McCoy. pic.twitter.com/LCJuuKe5Gm