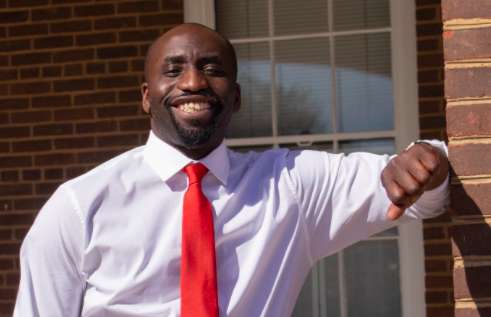 Kevin Harris sees himself as a man of the people, someone residents can confide in to help solve their problems.

The 40-year-old local business owner says he decided on March 1 to run for City Council as a democrat in the June 8 primary.

He’s the former president of the Alexandria Redevelopment and Housing Authority (ARHA) Resident Association, and since 2003 has owned Hoop Life Inc., which teaches basketball camps, clinics, classes and after-school programs in the city and throughout Northern Virginia.

Harris lives with his wife and four children in Old Town. He’s is a native of Washington, D.C., and has lived in Alexandria for more than 25 years. He’s got a bachelor’s degree in business from Alabama State University, where he got a full athletic scholarship and was named captain of the basketball team. He later played professionally for the Dakota Wizards before starting Hoop Life, Inc.

Harris said systemic racism persists in the city, and highlights the creation of an ARHA safety committee to meet with police as one of his achievements. The public housing community has had busy last few years worth of shots fired incidents and other criminal activity, and Harris said residents are tired of feeling powerless.

“I deal with so many individuals who work in this city who can’t afford to live and talking to them to hearing their stories, it’s just it’s just troublesome,” he said. “There was an idea and a notion from the surrounding communities that ARHA residents are almost collaborators in the criminal activity that is taking place… But all these residents from all these different properties came together to organize to one speak to the fact of trying to build a better relationship with the police department.”

Affordable housing is also one of Harris’ key issues.

“I can’t stand to see people try to take advantage of others just because they feel like they’re in a position of power,” he said. “Think about it: 90% of the city’s affordable housing is gone. There’s a lot of individuals, especially individuals of color who have moved out of the city, who can’t afford to live here any longer. There’s a sense of gentrification. You see those changes in the school system, you see those changes in business, you see those changes in the communities. Some of these areas that were predominantly African American are no longer. So, I want to make sure that things are going in the right direction and be that voice for those individuals to make sure that their needs are being met, as well as everyone else.”