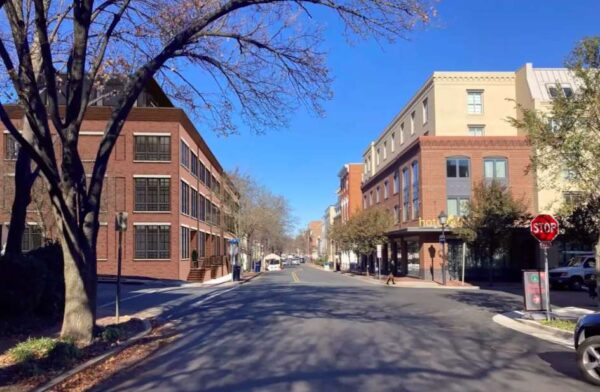 It’s the Kobayashi Maru of developing in Old Town: how do you simultaneously create a building that fits in seamlessly with the historic nature of Old Town without being seen as imitating it?

The issue was recently brought up at a Waterfront Commission meeting on Tuesday in a discussion about the proposed redevelopment of an existing parking garage at 101 Duke Street into townhomes.

On paper, the project seems like the end result of “lessons learned” after years of controversy surrounding the development of the Hotel Indigo across the street. The project is residential, less than 50-feet tall, and is comprised of red brick to fit in with the neighborhood. Members of the Waterfront Commission praised most aspects of the plan, and member Barbara Saperstone in particular praised the developers for going above and beyond in efforts to reach out to neighbors and soliciting genuine feedback, but one criticism was that the project hews a little too closely to the historic look of the surrounding buildings.

“When we have new buildings we want to make sure they don’t mimic historic buildings such that it has an almost Disneyland-like effect of avoiding fake history,” said Commission member Gina Baum. “There is this discussion of new vs. old, and it was one of the things in waterfront planning that was important to many people.”

Members of the Commission said that while they building should fit into the neighborhood, it shouldn’t directly ape the architectural motif of older buildings.

“That area was industrial, much of that part of the street was industrial,” said member Christa Waters. “In keeping with what Gina said about the waterfront plan: we don’t want to fake it, we want it to be more authentic, and we also want to admit that these are being built now. I don’t see the need to have everything look as though it were trying to be a colonial era house. I know we’re all just in the land of opinion here but I want to make sure that there’s a little balance.

On the flip side, member Eldon Boes said he was tired of the modern industrial look, as opposed to older industrial looks. During earlier waterfront arguments over development, one of the more vocal criticisms of newer projects was that they looked at odds with the nearby historic buildings.

One member of the Commission noted that the developer isn’t likely to get more clarity on the issue when they go to the Board of Architectural Review, where the panel is as evenly divided between architectural traditionalists and modernists.

One other question raised in the Waterfront Commission meeting was the impact on parking from the redevelopment of the garage. Public access to the garage was cited as adequate parking in the development of the Hotel Indigo, but now it seems that with the hotel’s parking being to underused that could swing the other way.

A representative of the developer said that the city requirement for hotel parking today is half of what it was when Hotel Indigo went through the planning process, and the logic of the reduction is evident in the mostly empty garage. The developers of Hotel Indigo are currently in a permitting process to convert some of the valet parking in the garage to public parking.

“The smart, unhelpful answer form a zoning attorney would be ‘it doesn’t matter what’s in that garage,'” said zoning attorney Ken Wire, “but the reality is it’s a fair question and we should answer it. The top two levels are reserved parking that are 1/3 to 1/2 full now. The loss of public parking is the first floor. We have some data we will share with utilization, so it does have an impact. But coupled with Hotel Indigo, I think that impact won’t be as dramatic as if the hotel stayed public parking only.”