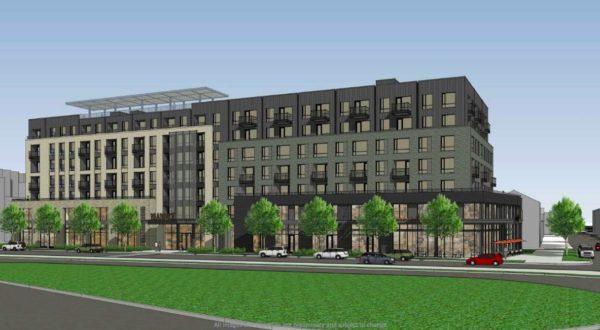 After mostly smooth sailing, the City Council’s 4-3 denial of the Braddock West project came as a bit of a surprise.

The plan was to replace a series of townhomes just east of the Braddock Road Metro station with a towering new mixed-use development, containing 174 residential units and ground floor retail and restaurant uses.

The project faced some concerns from nearby residents — primarily concerning the stormwater impact from the project and the scale — but far less than the controversial Heritage project the City Council unanimously approved. The project had a seal of approval from the neighboring residential association and the Alexandria Redevelopment Housing Authority, which had baffled one member of the Planning Commission who had noted the project would dramatically overshadow the Andrew Adkins development.

Those concerns that had been in the background at the Planning Commission came to the forefront, with City Council members Amy Jackson, Canek Aguirre, John Chapman and Mo Seifeldein voting against the project. Aguirre raised the issue that the outreach done by the project was years ago when the development was part of a larger development with ARMA, but those plans have since fallen apart after the ARHA redevelopment was delayed.

“I was at that first meeting they did for the bigger project, interesting meeting that took people by surprise,” Chapman said. “I would share the concern that Mr. Aguirre has shared. The community has changed over the years and it is a different project. To try to act like the community outreach done for the full block with ARMA is the same as a separate project is not the way we should operate.”

Pepper also slammed the project for what she argued was disappointing 10-year-storm-focused stormwater sewage improvements, despite staff arguing that the project shouldn’t be saddled with fixing the neighborhood’s woefully inadequate stormwater protections.