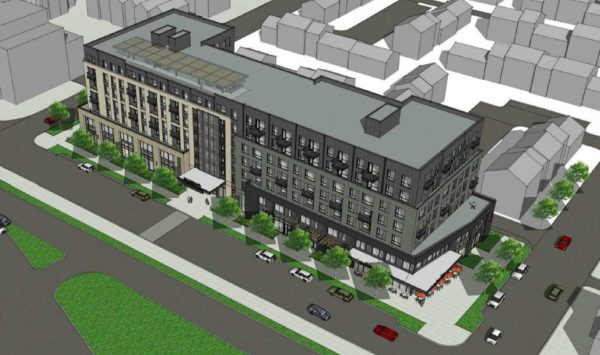 Braddock West will transform the view of Alexandria from the Braddock Road Metro station, but some of the specifics of that arrangement and the impact on neighbors is unclear as the project heads to City Council review on Saturday, March 13.

Unlike some developments in Alexandria, Braddock West is moving forward with support from neighborhood organizations like the Braddock Implementation Advisory Group and the Alexandria Redevelopment and Housing Authority (ARHA). The Planning Commission also recommended approval, though with some lingering questions about who will pay for the sewer work required by the city.

The applicant requested reimbursement from the city for required stormwater work at the project. That work had initially been planned to be coordinated with block-wide redevelopment that would have mitigated that cost, but with ARHA’s redevelopment of the Andrew Adkins development delayed, the burden of the cost was shifted entirely to the developer of Braddock West.

Members of the Planning Commission said it was not within their power to create exceptions or grant reimbursement, but said the issue could resurface when the project goes to the City Council.

The discussion also raised concerns from Planning Commissioner David Brown, who was the lone vote against the project, who said he was uncomfortable with the city disregarding its own master plan for a site without clear explanation of why.

I have no hesitancy in saying I can’t support it. I’ve made clear in my past my reservations on a situation like this, where a development is accompanied by a master plan amendment and rezoning. This development application is everything the Oakville Triangle Project is not. That project had a careful amendment and analysis of how the land needed to be adjusted  — before we got to the problem of developing conditions for approval for a single property.

Not in this case, we’re torn over issues related to financial responsibilities for the development of a single property when what the master plan said — which this project is not consistent with — was for [development] on this property along with the Adkins site for four acres

My standard for approval of a change of master plan is you need to explain to me why the master plan recommendation was wrong int he first place or why circumstances have changed so significantly that those circumstances are no longer viable.

Brown said he only got vague responses from the staff for why the ARHA project fell through, and he is concerned the new project will fully eclipse the Andrew Adkins neighbors despite a letter of endorsement for the project from ARHA CEO Keith Pettigrew.

“What I see today are garden style low-level apartments where all the light and air will be completely blocked by a building seven stories high and a football field long from all of the western sun that comes streaming in over Braddock metro site in the afternoon,” Brown said. “If I were representing ARHA I’d be screaming about that, not saying it’s a wonderful project.”

Then-Chair Nathan Macek said that the city has to allow flexibility around master plans to adapt for market conditions.

“Market conditions are subject to change,” Macek said, “and what was envisioned, when it doesn’t materialize to the extent in this case where redevelopment of the full city block was not possible, we need to look for next most consistent approach with small area plan.”